Sperling’s BestPlaces revealed the Top 10 Safest Places to avoid natural disasters, with three of them located in California and Portland leading the pack.

The data analyzes eight risk factors weighted by severity and frequency of the threat. The most important risk factors were tornados and hurricanes, then flooding and earthquakes, and drought, hail, wind and wildfires were considered less impactful. 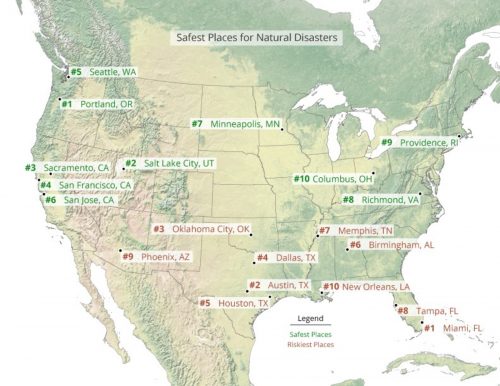 This data is based on 30 years of hazardous weather trends. Bestplaces.net also compiles other pertinent location data including cost of living, crime, schools, and anything else needed to make a sound decision on where to live.

Some might find it surprising that several California places rank in the top ten, given the earthquake risk on the West Coast.  Sperling explains, “We considered the risk from a major earthquake to be less than that from hurricanes or tornados.  It’s entirely possible that one could spend a lifetime in California and never be impacted by an earthquake, while hurricanes and tornados can occur regularly.”

Of the 50 largest metros in the US, the top 10 safest places to avoid natural disasters include:

And the top 10 riskiest places for natural disasters are:

The BestPlaces rankings are based on the frequency and severity of hazardous weather events over the last 30+ years, analyzing the tracks and locations of serious storms which caused injury and damage.  Governmental agencies providing the raw data include NOAA, USGS, and NCDC Storm Events Database.