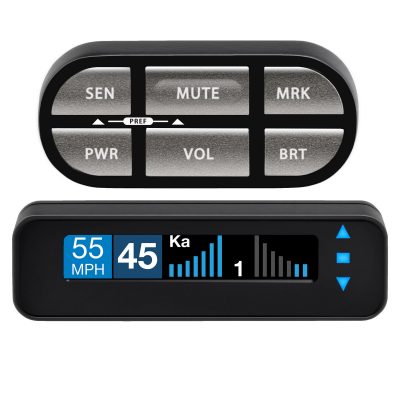 Designed to be seamlessly integrated into the vehicle, the ESCORT MAX Ci features a front radar receiver and front laser shifters protecting drivers against all speed monitoring devices. The ESCORT MAX Ci 360 features both front and rear radar receivers as well as front and rear laser shifters for a complete 360 degrees of driver awareness with directional alert warning by way of arrow indicators on the all new full color OLED display.

Completely redesigned, the new ESCORT MAX Ci and MAX Ci 360 give you smaller, more powerful laser shifters that defeat the latest in laser-based speed detection technology along with all new radar sensors that have updatable IVT™ filters that reject false alerts from the latest in-motion vehicle safety systems like collision avoidance, lane departure systems and other advanced driver-assistance systems (ADAS).  The new MAX Ci and MAX Ci 360 also include GPS and Bluetooth® for connectivity to the ESCORT Live Community and the DEFENDER® database of red light and speed camera locations.

In addition, both the ESCORT MAX Ci and MAX Ci 360 are USB updatable to combat new threats as they may come out and always run at peak performance.  The systems also offer increased range while remaining 100% undetectable electronically for complete stealth operation.

“ESCORT is the leader in radar and laser detection technology and our customers expect the best from us,” said Dave Smidebush, Vice President and General Manager, Radar Category for Cedar Electronics.  “The advancements we have made in the new ESCORT MAX Ci and MAX Ci 360 will meet and exceed those expectations.”