Hands Off? Not Quite. Consumers Fear Technology Failures with Autonomous Vehicles

With the exception of Gen Y,[1] all other generational groups are becoming more skeptical of self-driving technology, which poses a new challenge to car manufacturers and technology developers, according to the J.D. Power 2017 U.S. Tech Choice Study,SM released today.

“In most cases, as technology concepts get closer to becoming reality, consumer curiosity and acceptance increase,” said Kristin Kolodge, executive director of driver interaction and HMI research at J.D. Power. “With autonomous vehicles, we see a pattern where trust drives interest in the technology and right now, the level of trust is declining.” 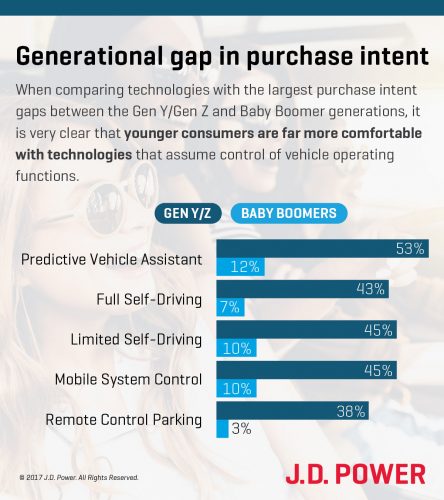 Compared with 2016, 11% more Gen Z consumers and 9% more Pre-Boomers say they “definitely would not” trust automated technology. However, similar to the 2016 study, consumers this year show great interest in collision protection and driving assistance technology. Six of the top 10 features that consumers were most interested in before learning the price—smart headlights, camera rear-view mirror, emergency braking and steering system, lane change assist, camera side-view mirrors and advanced windshield display—come from these two categories.

“Along with collision mitigation, there are many benefits to autonomous vehicles, including allowing those who are unable to drive in today’s vehicles to experience freedom of mobility,” Kolodge said. “Interestingly, though, 40% of Boomers do not see any benefits to self-driving vehicles. Automated driving is a new and complex concept for many consumers; they’ll have to experience it firsthand to fully understand it. As features like adaptive cruise control, automatic braking and blind-spot warning systems become mainstream, car buyers will gain more confidence in taking their hands off the steering wheel and allowing their vehicles to step in to prevent human error.”

Additional findings of the 2017 study include:

The study was fielded in January-February 2017 and is based on an online survey of more than 8,500 consumers who purchased/leased a new vehicle in the past five years.