Six Flags Magic Mountain — in partnership with Warner Bros. Consumer Products, on behalf of DC Entertainment — debuted the newest innovation in immersive thrills, JUSTICE LEAGUE™: Battle for Metropolis — Ride. Play. Triumph. The next generation of the award-winning Six Flags 4D gaming attraction now features a spectacular new finale, new game targets, video mapping, giant 180-degree screens and the introduction of one of DC’s most notorious Super-Villains, Harley Quinn. This cutting-edge attraction immerses players into the DC Universe featuring interactive content and motion-based vehicles. Key features include one of the first-ever virtual 360-degree loops on an attraction, and interactive 180-degree toroidal screens that allow riders to experience state-of-the-art gaming while riding in six-passenger pitch and roll vehicles synced to custom action-packed scenes featuring some of the most iconic DC Super Heroes and Super-Villains. 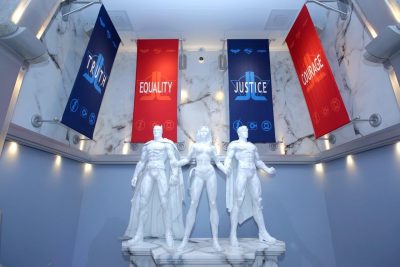 Riders join members of the JUSTICE LEAGUE™ Reserve Team in a multi-sensory four-minute game experience facing wind, fire, fog and special effects as they battle alongside iconic DC Super Heroes, Batman, Superman, Wonder Woman, The Flash, Cyborg and Green Lantern to save the city of Metropolis from Lex Luthor, The Joker and his henchmen. Also wreaking havoc is Harley Quinn, The Joker’s favorite sidekick. The climactic interactive battle scenes between the DC Super Heroes and Super-Villains include a multitude of special effects and thrilling ride experiences as guests shoot targets and score points against their friends and family while traveling on a high-speed chase through the streets of Metropolis. Falling from a bridge looping through Green Lantern’s construct and battling the Lex Bots in an underground subway station are all part of the interactive content action.

“We’ve taken the traditional dark ride and pushed the limits. JUSTICE LEAGUE: Battle for Metropolis is a total immersive 4D gaming experience that is going to blow away our guests and surpass all expectations. It is the most innovative and multi-faceted attraction that this park has ever built,” stated Bonnie Sherman Weber, Six Flags Magic Mountain park president. “Combining some of the hottest DC characters with state-of-the-art technology, we are able to deliver unmatched, interactive thrills that are sure to take So Cal by storm.” 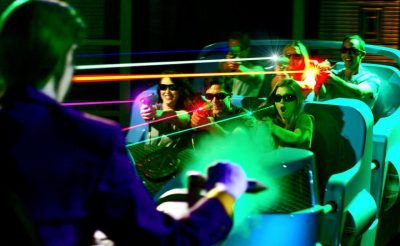 Located in the expansive five-acre newly-themed area of the park, JUSTICE LEAGUE™: Battle for Metropolis — Ride. Play. Triumph. will immerse guests into the world of METROPOLIS™ once they enter the portal with the sights, sounds and atmosphere of the JUSTICE LEAGUE™. Part of an entire area remodel of surrounding attractions, culinary and retail locations as well as added entertainment, METROPOLIS™ will include the newly-painted THE RIDDLER’s™ Revenge stand-up coaster; METRO PARK™ Pub, featuring live music and traditional pub fare such as flatbread pizzas and appetizers; BIG BELLY BURGER™ and Carlini’s Pizza; and ACE O’ CLUBS™, featuring local favorite mesquite-smoked barbeque. The new HALL OF JUSTICE™ gift shop will carry all the hottest JUSTICE LEAGUE™ memorabilia and clothing. JUSTICE LEAGUE™ in-park characters will call METROPOLIS™ home for greeting park guests, and they can have their photo taken in front of a DC Super Hero or Super-Villain backdrop.

Six Flags Magic Mountain 2017 Season Passes are currently on sale. For a limited time, purchase four or more Magic Mountain, Hurricane Harbor or Combo Passes and get one FREE parking pass. Additional Season Pass perks include free tickets for friends, park admission to Fright Fest, Holiday in the Park and more. Season Passes can be purchased at the main gate ticket booths or online at sixflags.com. Online Pass purchases are eligible for low monthly payments through the Membership program.

Season Pass Holders can make the most out of visits to the park with exclusive Pass Holder offers. Add an All-Season Dining, Shopping, Photo or THE FLASH Pass to a Season Pass or Membership. Visit sixflags.com for more details. Pass add-ons may be purchased online or at the park.

Save time and money. Buy and print tickets at home and go straight to the gate. Plan ahead and save up to $25 on Six Flags Magic Mountain general admission when tickets are purchased in advance of the visit date. Get more details and buy now at sixflags.com.

Six Flags Magic Mountain, the undisputed “thrill capital of the world,” is located at 26101 Magic Mountain Parkway, in Valencia, north of Los Angeles off Interstate 5 at the Magic Mountain Parkway exit. The park opens at 10:30 a.m. Sunday through Friday and 10:00 a.m. on Saturdays. For complete operating days and hours, visit us online at www.sixflags.com/magicmountain.