Pie Five Pizza Co. is making all of your New Year’s dreams come true with the launch of its nutrient-rich, lower-carb cauliflower crust.

“Cauliflower is exploding in popularity due to its taste and amazing health benefits,” said Christina Coy, Vice President of Marketing for Pie Five Pizza Co. “We were inspired to incorporate this versatile veggie to create a healthier crust that is still super delicious. Now, with the debut of our cauliflower crust, health conscious guests don’t have to cut pizza out of their diet.” 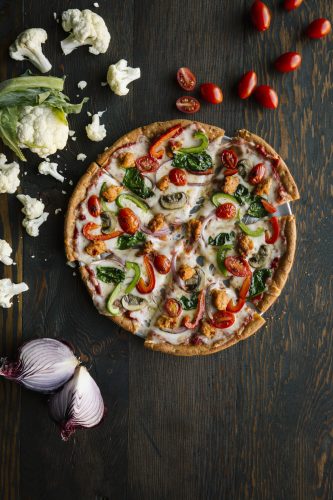 Pie Five is the first fast casual pizza concept to introduce a cauliflower pizza crust to its dough line-up. The new cauliflower crust is gluten-free with only 40 net carbs. That’s less than half of the net carbs in any other Pie Five crust. The specialty crust also has less than half of the sodium found in other crusts and may be the best crust option for those with diabetes. Load some fresh veggies onto the customizable pizza and you’re all set!

Cauliflower is rich in Vitamin C, Vitamin K, health-promoted phytochemicals and anti-inflammatory compounds. It is also an excellent source of natural antioxidants and helps improve digestion and detoxification.

The new crust will be added to Pie Five’s three existing made-from-scratch crust options – crispy artisan thin, classic pan, traditional Italian along with gluten-free.  The cauliflower crust will only be available through Feb. 11, so be sure to customize your pizza using this healthy delight before it’s too late.