Ralphs Makes it Easy for Customers to Save on Fuel

With gasoline prices on the rise and California’s new gas tax in place, Ralphs Grocery Company is stepping in to help Southern Californians save at the pump.

Beginning this Wednesday, November 15 through February 28, 2018, Ralphs’ customers will have the opportunity to save up to $1 off per gallon of fuel through its Ralphs Rewards Card fuel rewards program at Ralphs fuel centers and participating Shell locations in Southern California. 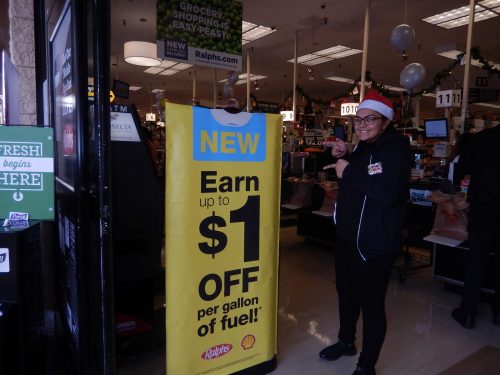 From November 15, 2017 through February 28, 2018, Ralphs customers will have the opportunity to save up to $1 off per gallon of fuel at Ralphs fuel centers and participating Shell locations in Southern California through the supermarket company’s Ralphs Rewards Card fuel rewards program. (PRNewsfoto/Ralphs Grocery Company)

Through the new program, Ralphs’ customers can redeem 1,000 fuel points on their Ralphs Rewards Card to earn $1 off a gallon of fuel. Fuel savings are limited to a single purchase of 35 gallons of fuel.

Beyond savings, Ralphs’ customers also benefit from the ease with which they can earn and redeem their Ralphs Rewards fuel points. With 191 Ralphs stores, 10 Ralphs fuel centers and more than 550 participating Shell locations in Southern California, shopping and saving at the pump is extremely convenient.

Ralphs Rewards fuel points can be earned by shopping at Ralphs supermarkets in the following ways:

The savings process is simple: Ralphs’ customers can redeem their fuel rewards at Ralphs fuel centers and participating Shell locations by simply swiping their Ralphs Rewards Card, or by manually entering their alternate ID or Ralphs Rewards Card number found on the back of the card at the pump before fueling up.

For more information about the Ralphs Rewards fuel rewards program go to https://www.ralphs.com/fuelfaqs.