In support of the craft beer revolution, Samuel Adams has spearheaded the search for the best homebrewers across the country for more than 20 years. Each year, thousands of homebrews are analyzed by expert beer judges at the Samuel Adams Boston Brewery but only three will win the ultimate prize: seeing their beers on tap and on shelves in the Samuel Adams LongShot American Homebrew Competition variety pack. Now through American Craft Beer Week (May 15 – May 21), three of the best homebrewers in the country will be able to share their homebrews with drinkers nationwide including Barnstorm Saison, brewed by David Cousino of Avon, OH, Wild Child American Wild Ale, brewed by Duane Wilson of Horseheads, NY, and Coffeehead Imperial Stout brewed by Sam Adams employee winner Graham Johnson of Marblehead, MA.

The Samuel Adams LongShot American Homebrew Competition was started in 1996 by Jim Koch, founder and brewer of Sam Adams, to recognize and support the homebrewing community where he and many other professional brewers got their start. In the time since, 1.2 million drinkers are now homebrewers and there are more than 5,300 breweries in operation today compared to 1,000 twenty-one years ago. In fact, multiple past LongShot winners have gone on to become professional brewers, opening their own independent American breweries including 2015 winner Tim Thomssen, brewer at Boiler Brewing Company in Lincoln, NE; 2013 winner Cesar Marron, brewer at Sketchbook Brewing Co. in Evanston, IL; 2009 winner Mike Robinson, brewer at Newburyport Brewing Company in Newburyport, MA; and 2006 winner Don Oliver, brewer at Dust Bowl Brewing Co. in Turlock, CA. 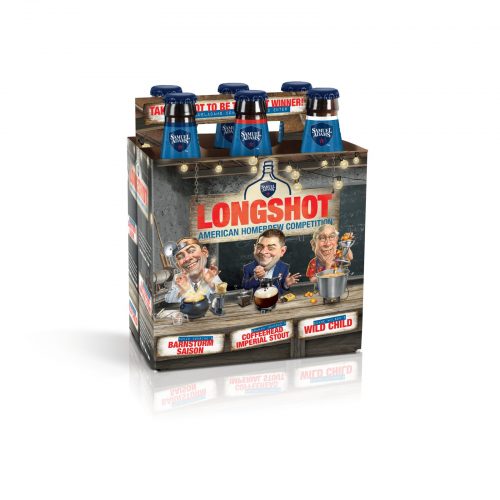 “In my profession as a pharmacist, everything is hard science. While that serves me well in this hobby, it does not begin to describe the magic of fermentation. I created the best I can by calculating, measuring, and observing. Then the real magic happens. That transition from what I can control to what I cannot is the heart of the allure of this wonderful hobby,” said David Cousino, a homebrewer since 1992.

“I love to cook. Making beer’s a lot like that. Homebrewers strive to make a lot of styles and we’re always looking to improve them. I enjoy the engineering that goes into making a primo beer,” said Duane Wilson, a homebrewer since 1995.

Graham Johnson’s Coffeehead Imperial Stout (7% ABV)
Graham’s Imperial Stout is aged on coffee beans and cocoa nibs imparting aromas of coffee, chocolate and hints of raisin. This decadent stout has a full-bodied mouthfeel filled with dark chocolate, expresso and raisin flavor as well as hints of plum and tobacco while finishing clean with a lingering sweetness.

“I love the attention to detail and making something that you can enjoy. For me, it’s a similar satisfaction to cooking a big holiday dinner, only it lasts longer,” said Graham Johnson, a homebrewer since 2014 and Samuel Adams Longshot Employee Contest winner.

For homebrewers who are interested in the 21st annual LongShot American Homebrew Competition, watch for details on www.samueladams.com/longshot.