Sting: Live At The Olympia Paris on DVD, blu-ray

Eagle Vision and Cherrytree Management today announced the release of Sting: Live At The Olympia Paris on November 10, 2017 on DVD, Blu-ray. Available on Amazon.

Sting: Live At The Olympia Paris captures the musician’s critically-acclaimed guitar-driven rock tour as it hit the French capital for a very special performance at the iconic venue in April, 2017. Hailed “the show of a lifetime” (The Vancouver Globe & Mail), Live At The Olympia Paris celebrates highlights from across the 16-time Grammy® Award winner’s illustrious career, with blistering performances of new songs from his latest album 57th & 9th including the infectious first single,”I Can’t Stop Thinking About You”, and the anthemic “50,000”, alongside classic hits from The Police as well as Sting’s solo career. Sting: Live At The Olympia Paris showcases the wide range of his eclectic style and songwriting influences in one momentous live show. 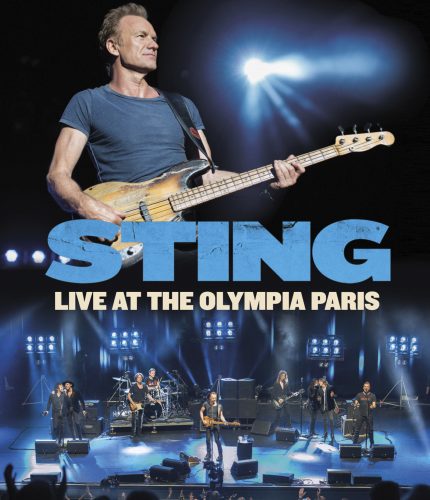 Praise for the 57th & 9th World Tour includes “This one was a treat for the fans” (Vancouver Sun); “Nothing short of brilliant” (Mass Live); “Sting’s current incarnation finds him at his best” (The Daily Gazette, Saratoga); “It may look effortless – but being this good for this long takes something very special.” (The Independent)

The sold out 57th & 9th World Tour was presented by Live Nation and began on February 1 in Vancouver, Canada. After a total of 115 concerts throughout North America, Asia, Latin America & Europe, the tour will conclude on October 17 in Romania. Sting’s latest album, 57th & 9th was released in November 2016 by A&M/Interscope Records, and was a Top 10 album in multiple countries around the globe.

About Sting
Composer, singer-songwriter, actor, author, and activist Sting has received 16 Grammy awards as a solo artist and with The Police. He was inducted into the Songwriter’s Hall Of Fame in 2002, and into the Rock And Roll Hall Of Fame (with The Police) in 2003.  Sting has sold over 100M albums from his combined work with The Police and as a solo artist. He is 2017’s recipient of the Polar Music Prize. Sting’s support for human rights organizations such as Rainforest Fund, Amnesty International & Live Aid mirrors his art in its universal outreach.