TAXA Outdoors President Antonio Gonzalez said the Mantis is a response to customers who want more room than the space afforded by the company’s current Cricket, TigerMoth and Woolly Bear product lines. With its Camp and Trek models, the Mantis is a rugged 18-foot-long camping trailer that comfortably sleeps 4 adults, weighs under 2,300 pounds and can be stored in a standard length and height garage. 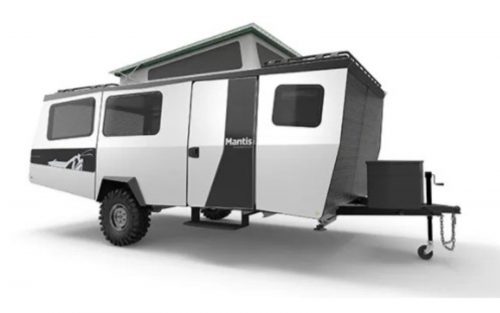 The Mantis is a rugged 18-foot-long camping trailer that comfortably sleeps 4 adults, weighs under 2,300 pounds and can be stored in a standard length and height garage. Along with Taxa’s NASA inspired design and integrated plumbing and electrical systems, it has all the necessities needed for your outdoor adventure lifestyle. (PRNewsfoto/TAXA Outdoors)

“We are very purposeful in selecting rugged, high-quality components for our products because we want our customers to take on that sense of adventure,” Gonzalez said. “They can go to a campground or national park, or they can pull off on a dirt road and go off-the-grid camping anywhere. We want to take them wherever that may be.”

He said TAXA Outdoors is the only RV manufacturer of an 18-foot trailer that features garage-ability and weighs 2,300 pounds unloaded, thanks to thoughtful design and the smart use of aluminum and polygal panels on an all-steel chassis.  Because of its light weight, customers may be able to tow the Mantis with most of their existing vehicles, rather than having to switch to larger vehicles with additional towing capacity.

The Mantis features a center roof section that pops up to allow standing room in the kitchen and bathroom areas, yet folds down to a height of 6 foot 9 inches for improved aerodynamics during towing and storage in standard-sized garages. The camper can be set up in minutes, which is a major selling point for outdoor enthusiasts who want to establish a base camp quickly.

Sleeping quarters include a queen-sized bed for two adults made from vinyl cushions of memory foam, which can be converted to a couch, as well as two adult-sized bunk beds at the trailer front.

Customers can order outside panels in UV-coated gun-metal gray or brushed aluminium, with choice of a signature vivid orange or sand color for the fabric of the pop-up section.

The basic Camp Mantis is entirely run on two 12-volt, deep-cycle batteries stowed in the kitchen area or shore power with a 110-volt inverter, either of which can power the 12-volt refrigerator. The enhanced Trek Mantis also is plumbed for propane, which can be used for the two-burner stove, water heater and propane-powered refrigerator, with an optional Truma Combi furnace for year-round use.  Air conditioning is optional on either model.

Fresh water capacity is 20 gallons, with a portable gray water tank and wet bath inside.  Toileting is accomplished with a Dometic cassette toilet with electric flush.

Equipped with electric brakes controlled through a 7-pin connector, the single-axle Mantis has 12-inch ground clearance and an independent suspension system.

“There is plenty of storage throughout the inside, underneath the kitchen area and the bunk beds,” Gonzalez said. “Owners can store their bikes inside or the outside with a hitch mount. Also, there’s a cargo deck and Thule roof rack for storing bikes, kayaks or other outdoor equipment.”