AMERICAN EPIC, a film series produced by Allison McGourty, Duke Erikson and Director Bernard MacMahon, explores the pivotal recording journeys at the height of the Roaring Twenties, when music scouts armed with cutting-edge recording technology captured the breadth of American music and discovered the artists that would shape our world.

THE AMERICAN EPIC SESSIONS is a feature-length film showcasing an all-star roster of contemporary artists, led by Jack White and T Bone Burnett, replicating this early recording process on an original 1920s electrical recording system and paying tribute to those great artists of the past. 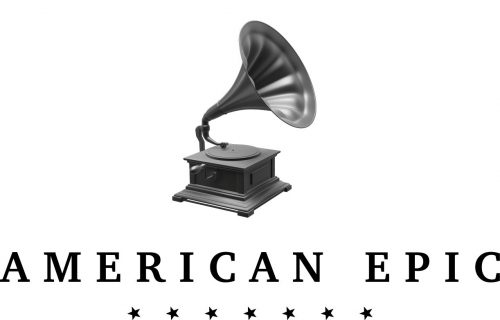 On May 2nd Touchstone will release AMERICAN EPIC, a companion book to the series featuring behind the scenes stories and exclusive and unpublished photos.

The AMERICAN EPIC historical documentaries are a journey back in time to the “Big Bang” of modern popular music.

In the 1920s, as radio took over the pop music business, record companies were forced to leave their studios in major cities in search of new styles and markets. Ranging the mountains, prairies, rural villages, and urban ghettos of America, they discovered a wealth of unexpected talent. The recordings they made of all the ethnic groups of America democratized the nation and gave a voice to everyone. Country singers in the Appalachians, Blues guitarists in the Mississippi Delta, Gospel preachers across the south, Cajun fiddlers in Louisiana, Tejano groups from the Texas Mexico border, Native American drummers in Arizona, and Hawaiian musicians were all recorded. For the first time, a woman picking cotton in Mississippi, a coalminer in Virginia or a tobacco farmer in Tennessee could have their thoughts and feelings heard on records played in living rooms across the country. It was the first time America heard itself.

Virtually no documentation of these extraordinary events survives and nearly ninety percent of the recording masters have been destroyed. A vital part of American cultural history has been lost.

Over three episodes, narrated by Robert Redford, AMERICAN EPIC rescues this history. The remarkable lives of these seminal musicians are revealed through previously unseen film footage and photographs, and exclusive interviews with music pioneers, their families and eyewitnesses to the era.

AMERICAN EPIC represents a ten-year odyssey undertaken by director Bernard MacMahon and producers Allison McGourty and Duke Erikson, and audio engineer Nicholas Bergh that involved tracking down countless long forgotten musicians, restoring the music that they recorded and reassembling the technology that created it. Along the way they brought some of the most important figures in contemporary culture to help them on their quest. Executive Producers Jack White, T Bone Burnett and Robert Redford have lent their support to what Redford calls “America’s greatest untold story.”

In THE AMERICAN EPIC SESSIONS, the team has reassembled the very first electrical sound recording system from the 1920s, and invited Jack White and T Bone Burnett to produce an album of recordings by twenty of today’s greatest artists. In this beautifully filmed musical feature, these artists are given the chance to pass through the portal that brought the world into the modern era.

Engineer Nicholas Bergh has reassembled this recording system from original parts and it is now the only one left in the world. The system consists of a single microphone, a towering six-foot amplifier rack, and a live record-cutting lathe, powered by a weight-driven pulley system of clockwork gears. The musicians have roughly three minutes to record their song direct to disc before the weight hits the floor. In the 1920s, they called this “catching lightning in a bottle.” All the musical performances in this film are live. The audio you hear is taken directly from the discs they were recorded to, with no editing or enhancements.

Director Bernard MacMahon explained, “AMERICAN EPIC is a love letter to the United States. It’s the story of one of the great moments in American history – when the voices of working people, minorities, and rural people throughout the country were first heard. It celebrates all I admire about the country – its rich culture, technological innovation, entrepreneurism and its freedom of speech.”

“In AMERICAN EPIC we can examine how important the fact is that when phonograph records were invented, for the first time ever, women, minorities, poor rural men and even children were given the opportunity to say whatever they wanted in song, for the whole world to hear, shockingly without much censorship,” said Jack White.  “What they were allowed to say on phonograph recordings, they were not allowed to speak in public or in person. That is an astounding thought.”

Nas, who records the Memphis Jug Band’s 1928 song “On the Road Again” said “When you hear me saying it, you might think I wrote it, because it sounds like something today. These guys are talking about carrying guns, shooting something, protecting their honor, chasing after some woman who’s done them dirty…it’s the same as rap music today, so it just tells you something about American culture, American music…It didn’t start with hip hop, it started a long time ago.  It started with America.”

“This is the story of a profound act of democracy – when the poorest people in our country were recorded and their stories, their songs, and their voices broadcast around the world,” said T Bone Burnett. “These early pioneers set a course that led to the extraordinary library of Jazz, Blues, Country, Bluegrass, Rock and Roll, and Hip Hop that is Our Music. This is the story of the United States – a kid leaves home with nothing but a song and conquers the world.”

“This is America’s greatest untold story,” said Robert Redford. “It’s an account of the cultural revolution that ultimately united a nation.”

Producer Allison McGourty said, “We traveled the length and breadth of America, from Cleveland, Ohio to the Gulf of Mexico, and from New York to Hawaii, in our quest to discover the identities and stories of America’s earliest recorded musicians.  We captured testimonials from the last living witnesses and direct descendants of America’s musical pioneers. This is the last time their story can be told before everyone who was there is gone.”

“Our mission was to capture the true spirit of the artists and to bring the atmosphere of their surroundings to life through archive,” said Supervising Editor Dan Gitlin. “We wanted to visually celebrate the raw power of their music.”

Producer Duke Erikson said, “The more we found out about these recordings, the more we realized how little was known about how they were recorded.  We became obsessed with figuring it out, with actually finding the machine that was used to record this amazing music.”

“Early electric recording is very interesting to me” said engineer Nicholas Bergh, “because it literally transformed the way the whole world communicated and it essentially enabled the record companies to set up recording sessions all over the country, where everyday people could record their songs and then have those songs distributed across America.”

Taj Mahal said about recording for THE AMERICAN EPIC SESSIONS “To be back at the front of the recording industry is incredible. The same machines my heroes and mentors have played on, and that this industry got jump-started from? I’d certainly like to be a part of that. As far as I’m concerned it’s the sound, and I don’t think you can get any better than vinyl. You can get clean, pristine, but you can’t get that juice.”

Beth Hoppe, Chief Programming Executive and General Manager, General Audience Programming, PBS, said, “We wanted to share this uniquely American story with our audience because of its exploration and celebration of original forms of music and early technologies. PBS has broadcast concerts and documentaries about a diverse variety of music genres over the years, and AMERICAN EPIC captures the foundation of American music history through the lens of some incredible untold stories.”

Anthony Wall, executive producer for BBC Arena, said, “When Bernard and Allison took me through their ideas and research, I didn’t hesitate to say yes. Arena has always been committed to this music but AMERICAN EPIC is the most comprehensive account of how and why it came to be recorded in the first place that I’ve encountered. The combination of the multi-ethnic context and acutely researched individual stories make it irresistible. The accompanying SESSIONS film is a delight. It’s a joy to see the respect and excitement so many of today’s best musicians bring to the discipline of recording in the same way as their heroes of decades ago.”

Stephen Segaller, executive in charge for WNET, said, “It’s not often that you’re pitched a project that is entirely fresh, immediately visual, and seems likely to change your whole understanding of cultural history. AMERICAN EPIC is that project – a documentary series that gives us an amazing narrative of cultural enterprise and creative energy, touching on deep American history – and a recording sessions vérité film that keeps on outdoing itself as artist after artist revels in the old-time music and brings it to new levels.”

Adam Block, President of Sony Music’s Legacy Recordings, said, “Simply put, Legacy exists in no small part to preserve and perpetuate our country’s musical heritage.  For us, AMERICAN EPIC is a celebration of the men and women who established the foundation of virtually everything that we as an industry do today.  It is one of the most remarkable cultural, technological and of course musical journeys of all time.”

Mark Williams, President of A&R for Columbia Records, said, “Listening to the incredible artists that contributed to THE AMERICAN EPIC SESSIONS, we see a direct link with the musicians of the past. As if time hasn’t existed and the same spirit, truth and soul of the earlier performers are as much part of the present as it is the past.  This record isn’t a tribute record as much as it is a continuation of the same story and messages that have been passed along to great artist of today.”