America’s Favorite Architectural Styles and Where to Find Them – Trulia

Trulia®, a home and neighborhood site that helps homebuyers and renters discover a place they’ll love to live, revealed Americans’ favorite architectural styles and where to find them across the United States. In their new survey, conducted online by Harris Poll of more than 2,000 Americans age 18 and older, Trulia found that Americans’ favorite home styles are craftsman (43%), ranch (41%) and colonial (36%). Millennials, aged 18-34 years old, were more likely to favor craftsman-style homes (52% vs. 36% of those aged 55+), while older adults, aged 55+, were more likely favor ranch-style homes (52% vs. 28% of millennials). 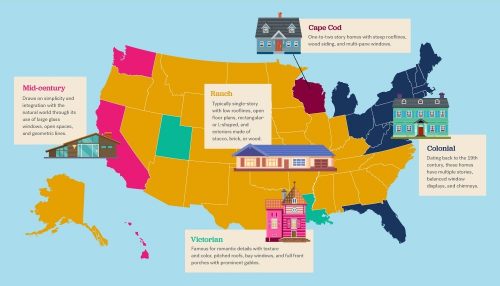 Most common architectural style in every state according to Trulia listing data. (PRNewsfoto/Trulia)

While these styles may be favorites amongst Americans, they may be hard to find. To help people discover where they can find their dream architectural style, Trulia dove into its listing data to find out how common various architectural styles really are. Turns out, a craftsman home will be hard to come by despite its popularity. Among all home listings on Trulia, the most common architectural styles nationally that are called out as selling points in listing descriptions are colonial, ranch, Cape Cod, Victorian, and mid-century. Though state-by-state, it varies.

Given the five most common architectural styles in America that buyers are more likely to find, the Trulia Design Panel, Trulia’s expert group of interior designers, home stagers and professional organizers, offered their tips on how to decorate for each type of home.

“Each architectural style across the country adds character and charm to a neighborhood, making each one unique.” said Lynnette Bruno, Trulia’s vice president of communications and research. “These decorating tips from the Trulia Design Panel help you bring character from the outside in so you can transform your space into a home where you’ll love to live.”

Tips for Decorating the Most Common Architectural Styles:

More details on these tips can be found here https://www.trulia.com/blog/architectural-styles/.

Survey Methodology: This survey was conducted online within the United States by Harris Poll on behalf of Trulia from February 6th—8th, 2018 among 2,079 U.S. adults ages 18 and older. This online survey is not based on a probability sample and therefore no estimate of theoretical sampling error can be calculated.