Ben & Jerry’s fans look forward to this time of year with hopeful anticipation and visions of a sweet, too-fleeting season. No, it’s not summer—it’s National Ice Cream Month, celebrated every year in July. This year, ice cream aficionados have new and flavorful ways to get the most of their favorite holiday month. Here’s a look at 2017’s ice cream highlights. 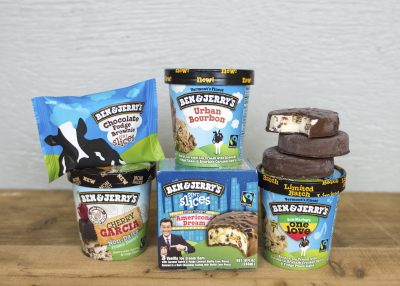 Ben & Jerry’s put a spin on chunks and swirls with Pint Slices. Inspired by the very best part of the pint, Pint Slices are euphoric flavors offered up in a round single serving, enrobed in a decadent chocolatey coating. These slices of ice cream goodness are available in four flavors: Chocolate Fudge Brownie, Chocolate Chip Cookie Dough, Vanilla Peanut Butter Cup, and Americone Dream.

A lineup of new cereal milk flavors, available in Ben & Jerry’s Scoop Shops, now reminds fans of Saturday mornings spent watching cartoons. Cocoa Loco, Frozen Flakes and Frozen Fruities bring the awesomely unmistakable taste of milk-splashed cereal to the ice cream shop. Available only for a limited time, head to your closest Ben & Jerry’s Scoop Shop for a bowlful of Cereal Splashbacks. If you want to wear your PJs, who are we to judge?

Most recently, One Love was launched with the Marley family’s blessing at West Hollywood’s iconic Roxy Theater. This banana-based, Bob Marley-inspired batch benefits Jamaica’s One Love Youth Camp. It’s available in pints and at Scoop Shops for a limited time, and is perfect for those who believe that chocolatey peace signs in ice cream are perfect for sharing with those they love.

These new flavors join more than 50 others in the Ben & Jerry’s lineup—which is more than enough to satisfy fans through a hot National Ice Cream Month. Currently, Ben & Jerry’s most popular fan favorites in the U.S., based on sales, are: