During the month of September, Chick-fil-A® invites users of the Chick-fil-A One mobile app to bring their appetite and redeem a free breakfast entrée in the month of September. App users can select from one of three free breakfast options for redemption, including the Chick-fil-A Chicken Biscuit, the Egg White Grill or the recently introduced Hash Brown Scramble. The offer is available only to app users from Aug. 31 to Sept. 30. 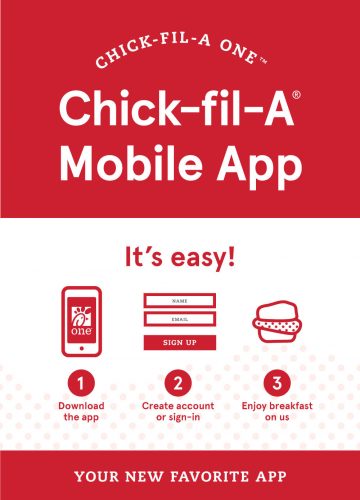 Free breakfast offer is available only to app users from Aug. 31 to Sept. 30. (PRNewsfoto/Chick-fil-A, Inc.)

“Treating customers to breakfast is our way of thanking them for dining with us, and is just the tip of the iceberg when it comes to the benefits of using our mobile app, Chick-fil-A One,” said Michael Lage, senior manager of digital experience for Chick-fil-A. “As you scan payment or order from the app, you earn your favorite free Chick-fil-A food, along with other perks throughout the year,” he said, adding that “the goal of the mobile app is to make dining at Chick-fil-A even more convenient.”