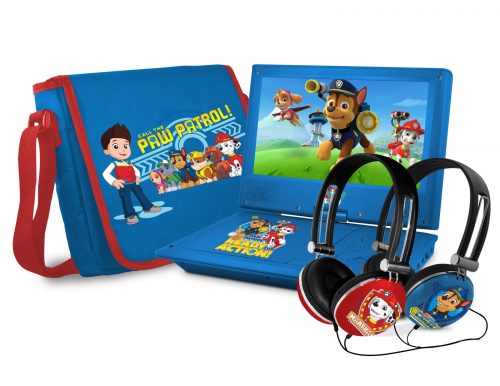 The 9″ PAW Patrol Portable DVD Player blends enjoyable entertainment with utility.  It has built in TTS functionality which allows children with visual impairments to enjoy their favorite Nickelodeon media without limitation.  It also includes a built-in stereo speaker, picture viewer with 180 degree screen tilt and swivel, multi-language OSD, and MP3 player. This bundle also comes with a pair of PAW Patrol-branded headphones so kids can listen to their favorite shows and movies privately, and is all packed into a kid-friendly, easy to carry PAW Patrol-branded case. Additionally, a free episode of PAW Patrol is included in the bundle via VUDU.

“It is an honor to partner with Nickelodeon, the number-one entertainment brand for kids and specifically PAW Patrol as the property aligns so perfectly with this new portable DVD player bundle,” said Roy Rayn, President, Ematic. “At Ematic, we fell in love with PAW Patrol and its values.  The heroic characters are beloved by kids everywhere and are a wonderful way to introduce the new Text-To-Speech technology to kids with the PAW Patrol DVD Player.”

Now in its fourth season, PAW Patrol is a top-rated CG-animated series starring a pack of heroic rescue pups–Chase, Marshall, Rubble, Skye, Rocky, Zuma, Everest and Tracker–who are led by a tech-savvy boy named Ryder. Together, they work hard to show the people of Adventure Bay that “no job is too big, no pup is too small!” Produced by Spin Master Entertainment, the series features a curriculum that focuses on citizenship, social skills and problem-solving. PAW Patrol airs weekdays on Nickelodeon.