Casio G-SHOCK announces the release of a special edition DW5600 model in collaboration with skate lifestyle brand, HUF Worldwide. Commemorating the brand’s 15th anniversary, the DW5600HUF-1 features the classic style of the DW5600 merged with various design elements that nod to HUF’s celebrated ‘Dirt Bag Crew’ culture, including its signature logo, a throwback graphic, and more. 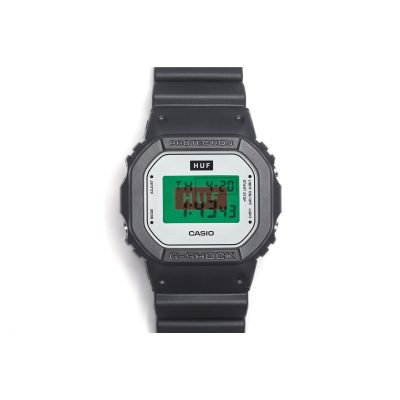 Marking the 2nd collaboration between G-SHOCK and HUF, the DW5600HUF-1 celebrates this HUF milestone by also highlighting each year of the brand’s 15 years on the band, as well as, “Hours Unaccounted For” written directly underneath the band, an acronym play on HUF representing inexplicable times passed. The signature HUF bar logo lights up at the touch of a button on the watch’s face, while a throwback graphic character known as the 15-armed Party Puss appears on the back case alongside a ’15 Beers Strong’ tagline. Each watch will also be encased in special packaging that resembles the brand’s signature shoeboxes.

Additionally, the DW5600HUF-1 comes equipped with G-SHOCK’s legendary technology of 200M water resistance and shock resistance. Other features include an EL backlight with afterglow, 1/100th second stopwatch and countdown timer, one daily alarm, a full auto-calendar and 12/24 hour formats – all in a 42.80 mm case.

The DW5600HUF-1 will retail for $120 beginning this Friday, July 14, and will be available at select retailers.