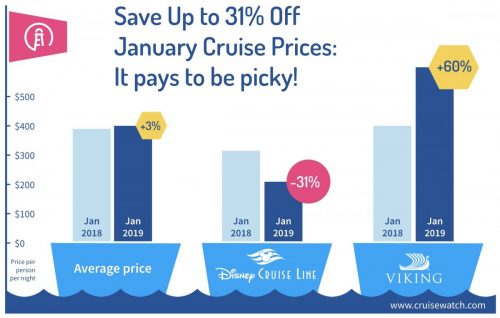 Fancy escaping the harsh winter with a lush tropical cruise getaway? Good news: prices for many cruises in January 2019 are significantly lower than they were a year ago. However, there are major differences by cruise line.

While the analysis found that the average cruise price per day actually increased by around 3% – from $397 to $407 per person per night – it also showed substantial price discounts for certain cruise lines.

Disney Cruise Line is among the cruise lines offering cabins at significantly cheaper rates as compared to the same time last year. Whereas a customer had to pay $317 per day for a January 2018 cruise if booked by late November 2017, for the same period one year later there are cabins available at $220 per day – a whopping 31% less.

Silversea Cruises, Ponant, and Viking Cruises all seem to have a higher occupancy demand, meaning that all three lines have increased prices this year, Silversea and Ponant by over 20% and Viking by a massive 60%.

cruisewatch.com is a digital cruise advisor monitoring cabin prices for all cruises, and has analyzed more than 13 million data points for this research. This particular analysis looked at cruise pricing on November 25, 2018, and compared it with the same view of November 25, 2017, comparing the average cheapest cabin available across all sailings by cruise line for departures in January.