Motel 6, all-American iconic brand, is celebrating a milestone this year with the commemoration of its 55th anniversary. To kick off its celebratory year, Motel 6 surveyed Americans across the nation about their travel history and behaviors, where they have and haven’t been, where they would like to go, and what they would like to do – and the results revealed interesting trends and statistics for the travel and lodging industry as a whole.

The Motel 6 American Travel Study in conjunction with Kelton Global, reveals that numerous Americans have yet to discover some of the best wonders the United States has to offer:

“Many Americans consider travel a luxury, but with Motel 6, it doesn’t have to be,” said Jim Amorosia, President and CEO of G6 Hospitality LLC. “As the leading U.S. economy hotel brand with more than 1,350 locations across the nation, we’re excited to use these findings to remind travelers that even their most sought-after travel ambitions can become an affordable reality. After 55 years, we continue to work diligently to deliver on our brand promise of providing a clean, comfortable room and great experiences to our customers.” 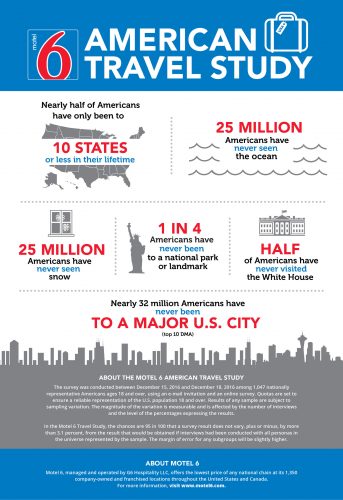 See It with Motel 6
To celebrate 55 years of being a part of the American travel experience, Motel 6 is giving away six (6) iconic U.S. trips enabling wanderlusters across the nation to finally realize their travel bucket list. Aspiring travelers can enter the “Motel 6 55 Years Anniversary Travel Sweepstakes” online at http://bit.ly/M6travelsweeps from Tuesday, April 18 to Tuesday, May 16. Six lucky winners will be awarded with a three-night stay at one of the below Motel 6 locations, and a $2,500 gift card towards their travel expenses:

“Been There, Done That,” They Said…
The United States is home to some of the world’s most iconic cities and tourist attractions stretching from coast to coast; however, the Motel 6 American Travel Study revealed that the average American has only visited 17 states in their entire life, and about half (48 percent) say they have visited only 10 states or less. On the other side of the spectrum, 18 percent of Americans have been to more than 30 states.

The least visited regions in the U.S. are Northwest (44 percent), and Northeast (31 percent). Astounding 78 percent of survey audience has been to Southeast, followed by 73 percent who claim they have been to Southwest states. Most popular destinations for the next state to travel to are: Hawaii (14 percent), Florida (11 percent), and California (10 percent).

When asked which of the following have you never experienced before in the United States, Americans responded:

Experiential Travel
For most Americans, experience is the driving factor for vacationing, with nearly 50 percent listing outdoor activities and adventure as their number one travel priority. Yet the survey showed that almost 25 million Americans (10 percent) have never dipped their toes in the ocean and 15 million (6 percent) has never touched snow. More so, while Americans continue to show interest in travel led by outdoor leisure activities, nearly half have never skied or snowboarded (56 percent) or even been to a spa while on vacation (49 percent).

When asked what experiences are most important on vacation, Americans responded:

Sightseeing Stars and Stripes
Though countless travelers come from all over the world to see the wonders of the United States, the Motel 6 American Travel Study shows that historical and political landmarks remain a neglected travel option as Americans are more likely to have visited an amusement park than a national park. More so, nearly half of Americans admit that they have never seen the White House (50 percent) or the Statue of Liberty (48 percent), even though 38 percent claim cultural and historic experiences are most important while traveling. Many Americans have yet to see some of the most iconic sights the United States has to offer, with Mount Rushmore as the least-visited landmark.

Game Day Globetrotters
Sports remain a big part of Americans’ travel plans with 12 percent noting they would vacation for sporting events alone, yet many haven’t experienced a professional game in-person. Findings also reveal that millennials are twice as likely as Baby Boomers (19 percent vs. 9 percent) to consider sporting events a crucial travel activity. About seven in ten Americans have never been to a tennis match (70 percent) and more than half have never attended a NASCAR Race (67 percent) or NBA game (52 percent).

Big City Breaks vs. Backroad Escapes
When it comes to urban adventures across America, about 32 million (13 percent) claim they have not been to a major U.S. city. Results of the Motel 6 Travel Study show that Boston, Mass. is one of the least-visited cities with half of Americans (50 percent) claiming they have never been to Beantown, and about two in five Americans have never visited San Francisco, Calif. (46 percent) or Los Angeles, Calif. (41 percent).

For more information regarding the “Motel 6 Travel Study” and how Americans can explore the United States with Motel 6, please visit www.motel6.com.

About The Motel 6 Travel Study
The survey was conducted between December 15, 2016 and December 18, 2016 among 1,047 nationally representative Americans ages 18 and over, using an e-mail invitation and an online survey. Quotas are set to ensure a reliable representation of the U.S. population 18 and over. Results of any sample are subject to sampling variation. The magnitude of the variation is measurable and is affected by the number of interviews and the level of the percentages expressing the results.

In the Motel 6 Travel Study, the chances are 95 in 100 that a survey result does not vary, plus or minus, by more than 3.1 percent, from the result that would be obtained if interviews had been conducted with all personas in the universe represented by the sample. The margin of error for any subgroups will be slightly higher.