Niall Horan is set to release his debut solo album, Flicker, on Capitol Records on October 20, 2017.  Horan unveiled the album’s cover and latest single, “Too Much To Ask,” and announced plans for an extensive U.S. and Canadian run on his “Flicker World Tour 2018.” Country superstar and “Seeing Blind” collaborator Maren Morris will join to support the new dates.

“Too Much To Ask” is one of the first songs Horan penned for the album, which he began working on last year. He co-wrote the track with long-time collaborator Jamie Scott. Produced by Greg Kurstin, who also produced “This Town”. 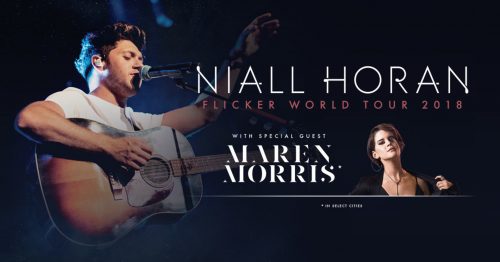 Horan will kick off his 2018 tour of the U.S. and Canada on July 18 at The Cynthia Woods Mitchell Pavilion presented by Huntsman in The Woodlands, TX. The run will include shows at the Greek Theatre in Los Angeles (August 7), Red Rocks Amphitheatre in Morrison, CO (August 20) and the Northwell Health at Jones Beach Theater in Wantagh, NY (September 12).

He is currently in Tokyo, in the middle of his “Flicker Sessions 2017 Tour,” which sold out in minutes. After having also visited Dublin, London, Stockholm and Sydney, Horan heads to Mexico and Brazil and will kick off the North American leg next Tuesday, September 19, at the Hollywood Palladium in Los Angeles. It will include an October 31 show at New York City’s intimate Beacon Theatre.

Horan, who has sold over 70 million records as part of the all-conquering One Direction, launched his solo career with the singles “This Town” and “Slow Hands,” which have both achieved Platinum certification (or higher) in the U.S., Canada, Australia, New Zealand and the Netherlands. “Slow Hands” went straight to Number One in 44 countries. Named as one of the “Best Songs of 2017 So Far” by Billboard, it now has more than 820 million combined streams worldwide. Horan has been honored with numerous awards in 2017, including People’s Choice, Teen Choice, Radio Disney Music and iHeartRadio MMVA awards.

Maren Morris is a Billboard chart-topping singer-songwriter whose major album debut, Hero, charted Number One on the Top Country Albums chart. Her debut single, “My Church,” hit Number One on the Country Digital Songs chart in 2016 and reached the top five on the U.S. Hot Country Songs chart. Morris is also the reigning 2016 CMA New Artist of the Year and was nominated for four awards, including Best New Artist, at the 59th Annual GRAMMY Awards, where “My Church” won the award for Best Country Solo Performance.

To ensure fans get access to tickets, Fan Registration for the U.S. and Canadian tour dates will be available here through Ticketmaster’s Verified Fan program.