Ovation Brands’® portfolio of restaurants – Old Country Buffet®, Ryan’s®, HomeTown® Buffet and Country Buffet® – and Furr’s Fresh Buffet® are taking families to the ball game with their newest Family Night promotion featuring the classic kids’ comedy, The Sandlot. The series will include weekly themes centered on the film. Family Night is every Thursday from 5-8 p.m. Activities may vary by location. 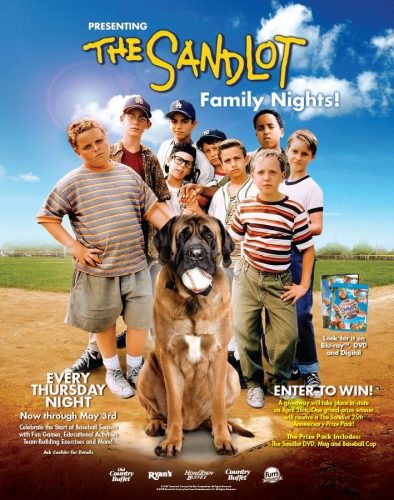 Twentieth Century Fox Home Entertainment is celebrating a quarter century of laughter and friendship with THE SANDLOT –25 TH ANNIVERSARY Collector Edition, which is now available on Blu-ray™, DVD and Digital. In this beloved family-favorite, it’s the early 1960s and fifth-grader Scotty Smalls (Tom Guiry) has just moved into town with his folks (Karen Allen and Denis Leary). Kids call him a dork — he can’t even throw a baseball! But that changes when the leader of the neighborhood gang recruits him to play on the nearby sandlot field. It’s the beginning of a magical summer of baseball, wild adventures, first kisses and fearsome confrontations with the dreaded beast and its owner (James Earl Jones) who live behind the left field fence. Soon nine boys have become best friends, Scotty is part of a team, and their leader has become a local legend in this hilarious and warmhearted comedy.

The series will feature a different theme based on the film every Thursday night. The following are the scheduled themes, which showcase one of America’s favorite past times, baseball.

The Sandlot Family Night will also feature a giveaway. The grand prize is a Sandlot Prize Pack, which includes a DVD, mug and hat.

In addition to kid-friendly fun and games, Family Night also serves up home-style meals for guests. Every Thursday from 4 p.m. – close, kids eat for just $1.99 with the purchase of a regular-priced adult or senior meal. Menus may vary. Age restrictions apply.