Ovation Brands’® portfolio of restaurants – Old Country Buffet®, Ryan’s®, HomeTown® Buffet and Country Buffet® – and Furr’s Fresh Buffet® are getting into the holiday spirit with the launch of their newest Family Night program featuring the classic comedy Home Alone 2: Lost In New York. The buffet brands are partnering with Twentieth Century Fox Home Entertainment in celebration of the movie’s 25th anniversary for this seven-week series that will include weekly themes centered on the film. Family Night is every Thursday from 5-8 p.m. Activities may vary by location. 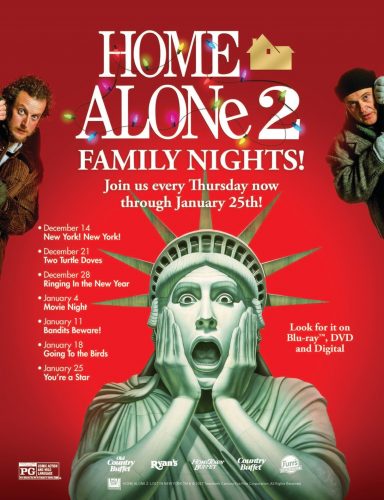 In the hilarious, high-flying adventure Home Alone 2: Lost in New York, Kevin McCallister (Macaulay Culkin) is stuck in New York City, while his parents spend the holidays in Florida! And although Kevin finds food, lodging and fun using his dad’s credit card, he learns that the Wet Bandits (Joe Pesci and Daniel Stern) have escaped prison and are also in New York! It looks like he’ll have to outrun and out prank them – again! The Home Alone 2: Lost in New York – 25th Anniversary Edition is available on Digital, Blu-ray™, and DVD now!

The Home Alone 2 Family Night series, will feature a different theme based on the film every Thursday night. The following are the scheduled themes.

In addition to wholesome fun and games, Family Night also serves up home-style meals for kids and parents to enjoy together. Every Thursday from 4 p.m. – close, kids eat for just $1.99 with the purchase of a regular-priced adult or senior meal. Menus may vary. Age restrictions apply.