MediaMall Technologies Inc. today announced support for DIRECTV NOW in PlayOn Desktop.  PlayOn’s DIRECTV NOW channel enables users to rise above device and recording limitations and watch DIRECTV NOW on virtually any device – including Roku and game consoles like Xbox, PlayStation, and Wii. PlayOn’s DVR capabilities further empower users to record and download DIRECTV NOW streams and watch them later, offline, on any device and even skip over commercials like a traditional DVR. Without PlayOn, DIRECTV NOW customers are only able to watch on select devices, and cannot record or download videos for offline viewing.

PlayOn Desktop is the first and only streaming DVR. With no additional hardware or devices, PlayOn’s downloadable desktop app turns a PC into a streaming media center – enabling users to (1) cast videos to their TV via any popular streaming device or game console (2) record shows to watch later, offline, on any device, and (3) skip over commercials. The software runs in the background of your PC and does not disturb its other uses. 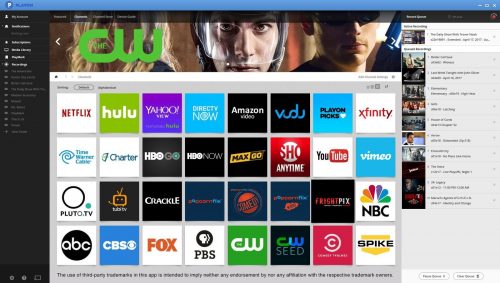 With PlayOn DIRECTV NOW customers get a full-featured DVR and live streaming to Roku and game consoles. (PRNewsfoto/MediaMall Technologies Inc.)

“PlayOn’s support for DIRECTV NOW is a game changer for cord cutters,” said Jeff Lawrence, President and CEO of PlayOn. “Until now, cord cutters had to sacrifice sports channels, live news and live shows, as well as give up their DVRs. The combination of DIRECTV NOW’s live content and PlayOn’s casting and DVR technology enables consumers to watch anything they want, anytime they want on virtually any TV or device. The combination of PlayOn and DIRECTV NOW is truly revolutionary, and rivals Comcast’s Xfinity feature set at a fraction of the price.”

DIRECTV NOW provides an inexpensive alternative to cable and satellite subscriptions. Until now those savings came with sacrifices such as the lack of a DVR and limited device support (noticeably unsupported are Roku and game consoles like the Xbox One or PlayStation 4).  Now with PlayOn, DIRECTV NOW customers can truly enjoy a complete TV experience in their home, or on the road.

PlayOn is the world’s-first, fully-featured Streaming Video Recorder (SVR). Use PlayOn to watch your favorite streaming videos on your PC or mobile device any time, even offline. Recorded TV shows and movies can be viewed ad-free, thanks to AdSkip, allowing for interruption-free binging. MediaMall Technologies, the creators of PlayOn, PlayOn Cloud, and MyMedia was founded in 2003 to make it simple, affordable and fun to enjoy your favorite movies, TV shows, and videos from the internet on your TV or on your mobile devices. MediaMall has offices in New York, Seattle, and Copenhagen. Visit us at www.playon.tv