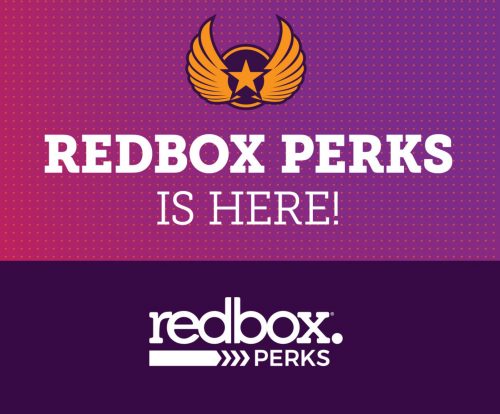 The enhanced program offers more opportunities for customers to earn points, including renting and buying games, DVDs, Blu-ray discs, On Demand content*, as well as renting discs for multiple nights. As customers rent and buy movies and games, they will earn “Star,” “Superstar” and “Legend” status to unlock never-before-available program perks, such as free upgrades to Blu-ray and advance alerts about the hottest new releases.

Redbox Perks members will achieve “Star” status after making 10 rentals or purchases each calendar year. “Superstar” and “Legend” can be achieved by making 20 and 50 rentals or purchases each calendar year respectively. Once members reach each status, they will receive an exclusive welcome gift and additional opportunities to earn points and rewards. In addition to earning free DVD, Blu-ray and game rentals, Redbox Perks members will soon have the option to choose rewards from Redbox partners.

Under Redbox Perks, instead of just earning points per rental, customers will now earn points per night. Additionally, customers now have the opportunity to earn higher point values when renting Blu-rays and video games.

Customers that already take advantage of Redbox Play Pass should experience no difficulty transitioning over to Redbox Perks, as all points will be migrated into the new system. The new points balance will equal the same number of one-night rentals away from a reward as it did under the flagship loyalty program. To see new Redbox Perks point balances with the Redbox app, customers should sign out of their account and sign back in.

More than 27 million Redbox customers are members of the current loyalty program, and according to a recent Omnibus survey**, nearly half (48 percent) of all Americans find out what’s new in home entertainment from Redbox. Averaging one million disc rentals a day, Redbox is the top transactional home entertainment provider in the U.S. for movie rentals – ahead of other digital rental providers, and all of the nation’s cable and satellite VOD distributors.*** Redbox installed more than 1,800 net new rental kiosks in 2017.

Redbox recently announced a new On Demand service, offering many of the same new-release movies available at the Box, and an expanded library of a growing collection of hit movies and TV shows for rental or purchase On Demand.

*applies to On Demand rentals and purchases through Redbox.com and the Redbox Android app.