Roku announced the launch of “The Roku Channel,” a new streaming channel on the Roku platform specifically dedicated to giving customers free access to a collection of top films and more. Customers will enjoy award winners and big screen classics, whenever they want at no cost. There are no subscriptions, fees or logins required to access The Roku Channel – it is ad-supported and expected to have, on average, approximately half the advertising per programming hour as compared to traditional ad-supported linear TV. 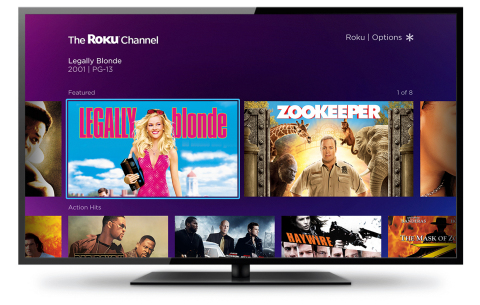 The Roku Channel will feature quality films such as Ali, The Karate Kid, Legally Blonde, and many others from leading studios including Lionsgate, Metro-Goldwyn-Mayer (MGM), Sony Pictures Entertainment and Warner Brothers among others. The Roku Channel will also help existing channel publishers drive additional viewership of their content on the Roku platform. Publishers participating include American Classics, Fandor, FilmRise, Nosey, OVGuide, Popcornflix, Vidmark, and YuYu; others are expected to be added over time.

The Roku Channel will be available through a phased roll out over the coming weeks. Once available for their device, customers can easily add the channel from the Roku Channel Store and begin using it for free.