The Carpenters ‘The Vinyl Collection’

On November 17, 2017 A&M/UMe will release The Vinyl Collection, a new career-spanning 12-LP vinyl box set chronicling the recorded output of one of the most celebrated and best loved duos in pop/rock history, the Carpenters.

The Carpenters’ The Vinyl Collection box set includes all 12 albums replicated on 180-gram black vinyl and housed in a stylish slipcase. Each album features lovingly restored original packaging and related artwork. Mastered for vinyl by Ron McMaster (The Beach Boys, Don McLean) at Capitol Studios in Los Angeles, each album will also be released individually. The box set does not include their two Christmas albums. 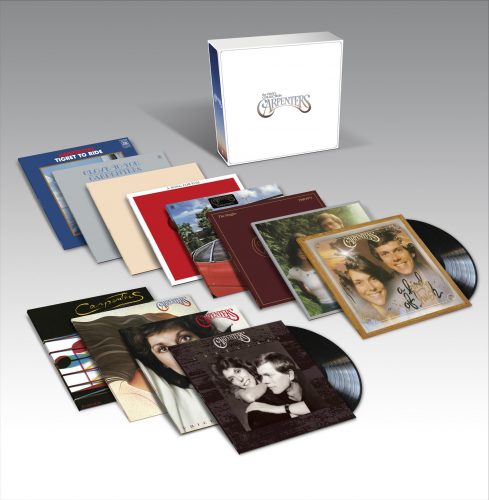 On November 17, A&M/UMe will release The Vinyl Collection, a new career-spanning 12-LP vinyl box set chronicling the recorded output of one of the most celebrated and best loved duos in pop/rock history, the Carpenters. (PRNewsfoto/UMe)

This unprecedented box-set collection chronicles the runaway success of the Carpenters’ super-successful 14-year career, which resulted in 11 studio albums and a greatest hits collection, The Singles 1969 – 1973, that has been certified at seven-times platinum and features such indelible chart-topping hits as “We’ve Only Just Begun,” “Top of the World,” “Superstar,” “Rainy Days and Mondays,” “Goodbye to Love,” “Yesterday Once More,” “It’s Going to Take Some Time,” “Sing,” “For All We Know,” “Hurting Each Other,” and “(They Long to Be) Close to You.”

The Carpenters – vocalist/drummer Karen and her older brother, pianist/composer/arranger Richard – are one of the most successful sibling duos in pop/rock history, having garnered over 100 million album and singles sales to date. Their unique blend of smooth vocal harmonies and classically influenced pop arrangements frequently vaulted them to the top of the charts, resulting in three No. 1 singles and five No. 2 singles on the Billboard Hot 100 and a dozen Top 10 singles overall, not to mention an astonishing 15 No. 1s on the Adult Contemporary chart.

Karen and Richard have more than earned their superstar standing as one of the world’s most popular and bestselling duos of all time, and their influence as songwriters, performers, and composers spans multiple generations and genres. The Carpenters have long elicited critical praise as well as numerous accolades from their contemporaries, from such notable artists as Paul McCartney, Gwen Stefani, Michael Jackson, and Beyoncé. Showing the scope of their reach, the 1994 If I Were a Carpenter tribute album showcased entries from alternative-rock icons ranging from Sonic Youth (“Superstar”), Shonen Knife (“Top of the World”), The Cranberries (“(They Long to Be) Close to You”), Sheryl Crow (“Solitaire”), and Matthew Sweet (“Let Me Be the One”), to name but a few.

The Carpenters were nominated for numerous GRAMMY Awards® throughout their storied career, and they won three of them: Best New Artist (1970), Best Contemporary Vocal Performance by a Duo, Group or Chorus for “(They Long to Be) Close to You” (1970), and Best Pop Vocal Performance for a Duo or Group for Carpenters (1971). Two of their most cherished songs have also been inducted in the GRAMMY® Hall of Fame: “(They Long to Be) Close to You” and “We’ve Only Just Begun.” Following Karen’s untimely death in 1983, the Carpenters received a well-deserved star on the Hollywood Walk of Fame.

No matter what your walk of life is, the Carpenters have a song that touches your soul and finds a place where there’s room to grow.

The Carpenters The Vinyl Collection