THE WHO MAXIMUM As & Bs

Following the success of the four 7″ singles box sets from The Who, MAXIMUM As & Bs presents all of the bands A sides, B sides and EPs in one place for the very first time. The 5 CD set features 86 tracks from the Brunswick, Reaction, Track and Polydor labels. 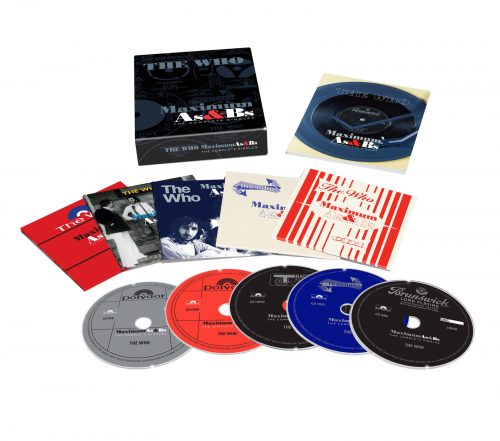 The Who – ‘Maximum As & Bs’ 5-CD box set of every A Side, B Side and EP to be released on October 27, 2017, on UMe/Polydor (PRNewsfoto/Universal Music Enterprises)

MAXIMUM As & Bs includes classic hits such as “Pictures of Lily,” “I Can See For Miles,” “Magic Bus,” “Pinball Wizard,” “Won’t Get Fooled Again,” “Substitute,” “I Can’t Explain,” “Anyway, Anyhow, Anywhere,” “My Generation,” “Squeeze Box,” “Who Are You,” “You Better You Bet,” “Real Good-Looking Boy” & the band’s last recorded track to date “Be Lucky.” The set includes rarely heard B sides and EP tracks along with the group’s first single, as the High Numbers – “Zoot Suit” b/w “I’m The Face.”

The box set features five CDs, in separate wallets, housed in a rigid, lift-off-lid style box along with a 48-page booklet, with track-by-track annotation by acclaimed Who writers with period photos & memorabilia. The full track listing for MAXIMUM As & Bs follows at the end of this release.

ALSO COMING!
August 18, 2017, sees the re-issue for the first time in a decade and a half of Pete Townshend’s critically acclaimed demo and outtake collections SCOOP, ANOTHER SCOOP & SCOOP 3. These albums give a unique insight into Townshend’s creative process and feature early versions of future Who classics including “Eminence Front,” “The Real Me,” “Long Live Rock,” “The Magic Bus” as well as many other Who hits. These double-CD and vinyl sets have been newly remastered at Abbey Road with the LPs remastered at half speed and pressed on pink (Scoop), yellow (Another Scoop) and light blue (Scoop 3) vinyl. The full track listings follow at the end of this release.

Also coming exclusively on vinyl on October 27, 2017, are MEATY, BEATY, BIG & BOUNCY and LIVE AT LEEDS, The Who’s first singles collection from 1971 and what the New York Times referred to as “Quite simply, it is the best live rock album ever made” respectively. Both albums have been cut at Abbey Road with half-speed mastering process and will be released on October 27 on heavyweight 180-gram vinyl.