Legendary British rock ‘n’ roll icons Def Leppard celebrate the 30th anniversary of their seminal album Hysteria, one of the best-selling and most influential releases in music history, with the release of Hysteria (Remastered 2017). The remastered anniversary edition is available in various formats via Bludgeon Riffola/Mercury/UMe—Super Deluxe Edition, Deluxe Version, 1 CD Vanilla Version, 2-LP Black Vinyl Version, & limited edition 2-LP Colored Vinyl Version. The reissue boasts B-sides and live tracks, and additionally the audio for “In The Round In Your Face (Live)” on CD for the first time. 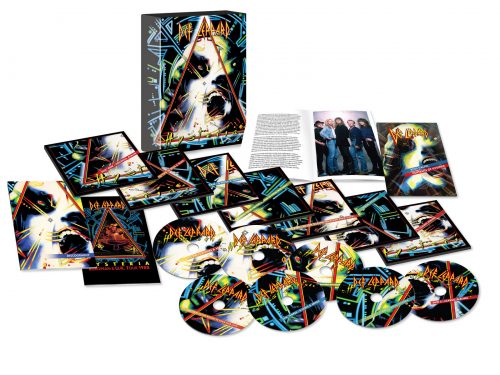 Legendary British rock n roll icons Def Leppard celebrate the 30th anniversary of their seminal album Hysteria, one of the best-selling and most influential releases in music history, with the release of Hysteria (Remastered 2017). (PRNewsfoto/UMe)

Said frontman Joe Elliott, “It’s hard to believe that it’s been thirty years since the release of Hysteria… In some respects it really does seem like only yesterday. So, to mark this milestone, we wanted to do something very special for our fans and give them the definitive version of the album, one that incorporates all of the memories and milestones that we caught on tape and some of the madness that we got up to on the road. We hope it means as much to you as it does to us.”

Added Phil Collen, “I look back at the whole Hysteria experience with excitement along with fond and tragic memories. It was our commercial zenith thanks to Mutt Lange’s insistence that we create an artistic hybrid between hard rock and pop top 40 music using every genre available as an inspiration. It was a rock album that would garner seven hit singles. Mission accomplished.”

Essential listening for fans across the board, Hysteria indisputably ranks as one of the most decorated and revered rock albums of all time. As the group’s second consecutive RIAA Diamond-certified record (10 million sales in the U.S.), it would go on to sell over 30 million copies worldwide and 12 million in the U.S. Moreover, the record staked a spot in the U.S. Top 40 for 96 weeks matched only by Born in the U.S.A. Rolling Stone touted it on the prestigious 500 Greatest Albums of All Time list, and a poll in Q placed it among the 100 Greatest Albums of All Time. Dominating multiple charts, it captured No. 1 on the Billboard Top 200 and U.K. album charts, bolstered by immortal Top-5 anthems such as “Pour Some Sugar On Me,” “Animal,” “Love Bites,” “Hysteria,” “Rocket” and “Armageddon It.“

Among the new versions, the Super Deluxe Edition boasts 5-CD/2-DVDs including four books—Story Of; a Ross Halfin photo book; Discography; Hysteria Tour Program and Tour Poster. The Deluxe Version features 3 CDs, the Vanilla Version is 1-CD, and the Vinyl Version is 2 Black LPs.  In addition, there will be a limited-edition, 2-LP Colored Vinyl available via D2C channels for the first time.

With more than 100 million albums sold worldwide and two prestigious Diamond Awards in the U.S., Def Leppard – Joe Elliott (vocals), Phil Collen (guitar), Rick “Sav” Savage (bass), Vivian Campbell (guitar) and Rick Allen (drums) — continue to be one of the most important forces in rock music. Over the course of their career the band has produced a series of classic groundbreaking albums that set the bar for generations of music fans and artists alike. The group’s spectacular live shows and arsenal of hits have become synonymous with their name, leading Def Leppard to be heralded as an institution in both the music and touring industry.