After twenty years of sold out Christmas tours and five celebrated holiday albums within as many years, saxophonist Dave Koz has done his share – and then some – to help to make the season bright. This year he has reassembled his original holiday lineup – pianist David Benoit, trumpeter Rick Braun and acoustic guitarist Peter White – for the making of Dave Koz and Friends 20th Anniversary Christmas, an album that features brand new recordings of classic Christmas songs.

The September 29, 2017, release of Dave Koz and Friends 20th Anniversary Christmas on Concord Records sets the stage for Koz and this same lineup to go back on the road in late November for the 2017 holiday season. 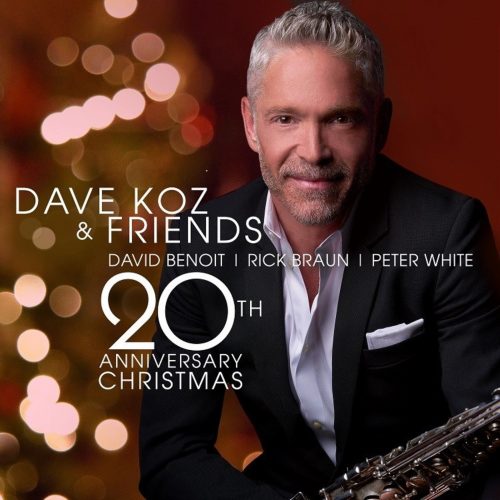 “If you had asked me twenty years ago, I would never in a million years believed that we’d be doing Christmas tours two decades later,” says Koz. “But here we are, still doing it, and it’s going as strong as ever! So with twenty years under our belts, it seemed like a great reason to celebrate, and that’s why we decided to include the original cast of our Christmas tour. It’s our chance to go back to the very beginning and celebrate the relationships that this whole journey was built on.”

In addition to the brilliant instrumental synergy of Koz, Benoit, Braun and White, Dave Koz and Friends 20th Anniversary Christmas also includes a stellar lineup of guest vocalists: Selina Albright, Javier Colon, Kenny Lattimore, Gabriel Orengo and Jeffrey Osborne. In addition, several of the tracks are enhanced by the West European Symphony Orchestra. This confluence of instrumental, vocal and orchestral talent creates the peaceful, familial, home-centered vibe that everyone seeks at holiday time.

“This is the kind of record that really sets a mood and stays with that mood,” says Koz. “The feeling and the image I get when I listen to it, is that quiet time after dinner when the kids are asleep, the fireplace is crackling, you’re enjoying an eggnog and you’re gazing at the tree with all the lights and trimmings. This music is perfect for that moment. It’s just a very chill, very beautiful collection of songs for that very peaceful time during the season.”

The album talks about the world in general, but especially at Christmastime. “People are different at this time of year,” says Koz. “Christmastime brings out the best in everyone and we all look at the world with childlike joy and tend to appreciate things more. We often hear people say – why can’t it be like Christmas all year ’round.”

Album highlights include; Orengo brings his expressive vocals to the Jose Feliciano classic “Feliz Navidad.” Koz calls the arrangement “a completely novel way of interpreting the song. Gabriel does this sort of Bruno Mars type of vocal delivery that’s so expressive and so in the moment.” Selina Albright’s heartfelt vocals bring a retro sensibility to “Have Yourself a Merry Little Christmas,” but at the same time, “she has all the dexterity of a modern pop singer,” says Koz. “She takes it to another level, but never overdoes it. Her version sounds so true to what the song is all about.” “O Tannenbaum,” one of Koz’s all-time favorites, creates an opportunity for plenty of interplay between himself and his three bandmates. “At the end of the track, there’s a musical conversation that came about organically.”

Indeed, home for Koz and his bandmates is any place where they feel a positive connection. It may be in your town, or even in your living room. “Oftentimes,” he says, “because we’ve been going back to some of the same venues over the course of twenty years for the Christmas tour, these places feel like our home – even if it’s just for two hours in one night in December. Likewise, the songs on Dave Koz and Friends 20th Anniversary Christmas are all very important to those of us who recorded them. We’ve poured a lot of love and care into each song, and hope fans are filled with warmth, kindness and Christmas Spirit.”