KAYAK recently launched its 2018 Travel Hacker Guide unveiling the top destinations and travel hacks for this year. Full of data-driven insights, this year’s guide features the hottest destinations of 2018, the cheapest cities to travel to and new to the guide this year – a “When to Fly” section detailing the most and least expensive days of each month to hop on a flight. 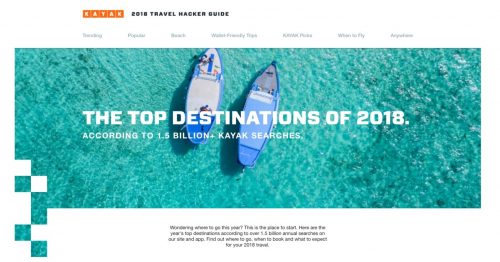 For those looking for ways to score the best deals this year – KAYAK’s top 2018 Travel Hacks include:

Two new additions to this year’s guide include the KAYAK Picks list, which features travel hacks to the most anticipated and newsworthy destinations of 2018, and the When to Fly section, which helps travelers plan their next trip with confidence by displaying the most and least expensive days of each month to fly.

For a full list of KAYAK’s 44 highlighted destinations in this year’s Travel Hacker Guide, check out the below:

The average trip cost was determined by looking at the 100 most searched for flight destinations, with the lowest overall median trip cost (flight + 3 night hotel stay).