TuneIn, a premier podcast destination and the world’s leading streaming audio app, today debuted First Play, a first-of-its kind podcast program offering early releases of new episodes from new and popular podcasts from networks like WNYC Studios, Gimlet Media, HowStuffWorks, Wondery, Feral Audio and StarTalk. New episodes will be available early, up to one week before they’re available on other platforms, and they will be free to all TuneIn users.

With the launch of First Play, TuneIn enables podcast super fans to hear episodes early from a selection of more than 30 podcasts, produced by the most popular podcast creators. Participating shows will debut their early releases throughout the initial run of the program, concluding December 31, 2017. 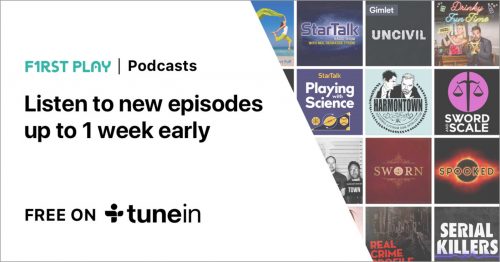 Between TuneIn’s breadth of content offerings and wide distribution network, this program exposes new audiences to great podcast content before anywhere else. More people are discovering podcasts than ever before, and TuneIn is uniquely positioned to support that interest with its integrations with connected devices, such as Amazon Alexa-enabled speakers.

“This special offering provides fans what they want most: the ability to get their favorite shows first and early,” said TuneIn Chief Content Officer Kevin Straley. “We’re proud to be releasing such a robust group of partners with fresh new content at a time when podcast listening is at a record high.”

The First Play line up can be found at TuneIn.com including:

As one of the new series to debut on the First Play lineup, Chris Giliberti, head of multiplatform at Gimlet Media, shares, “We are excited to partner with TuneIn to give its listeners exclusive early access to Gimlet’s newest show, Uncivil, via TuneIn’s First Play. Uncivil is a phenomenal, timely and important show and we can’t wait for audiences to enjoy it.”

Glynn Washington, host of WNYC Studios’ Spooked, is thrilled to be one of the first featured this week. “Debuting Spooked with TuneIn’s First Play is a great way to deliver supernatural thrills,” he says. “But don’t turn out the lights!”

“We’re delighted to learn that StarTalk would be among the first podcasts to be featured in TuneIn’s exclusive “First Play” programming,” says Neil deGrasse Tyson, host of StarTalk. “Our running goal has always been to broaden and deepen the public’s access to science in our lives through our informative and entertaining portfolio of celebrity guests and comedic banter.  Looks like TuneIn has a recipe that will make that happen as never before.”

This year, TuneIn has made significant investments to elevate itself as a premier destination for both podcasters and podcast listeners. According to internal data, TuneIn reports that they’ve had 27 million listening hours of podcast content so far in 2017, and 27% growth in podcast listening year-over-year from 2016 to 2017.