Universal Studios Hollywood celebrated the opening of “Christmas in The Wizarding World of Harry PotterTM,” transforming HogwartsTM castle with a breathtaking animated light projection show, choreographed to a musical arrangement from the Harry Potter movies as The Entertainment Capital of L.A. kicked off the yuletide season.

“We are delighted to welcome ‘Christmas in The Wizarding World of Harry Potter’ as a new Universal Studios Hollywood holiday tradition,” said Karen Irwin. “Millions of guests visiting from around the world have already experienced the incredible offerings of this immersive land. This exciting new holiday program further expands the Harry Potter universe by bringing some of the holiday spirit from the films to life for guests to experience for themselves.” 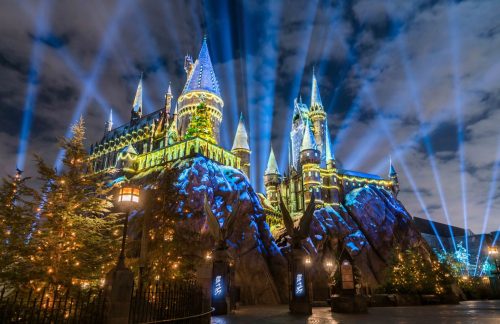 The all-new “Christmas in The Wizarding World of Harry Potter” experience will take place daily from November 24, 2017 through January 7, 2018.

Hogsmeade village also shines brightly as the quaint town celebrates with festive décor uniquely themed to each of the individual storefronts, along with holiday-themed fare served at Three Broomsticks and the eagerly-awaited seasonal return of hot Butterbeer.

The newly-introduced Holiday Dinner features a sumptuous roast turkey with gravy platter that includes pigs in blankets, a medley of vegetables, braised red cabbage and roasted potatoes served with cranberry sauce, along with Christmas Pudding.

As night falls on Hogsmeade village, the familiar sounds of Harry Potter music will resonate throughout “The Wizarding World of Harry Potter.”  Multiple times an evening, colorful projection mapping will illuminate Hogwarts School of Witchcraft and Wizardry with “The Magic of Christmas at Hogwarts Castle.”

The a cappella Frog Choir, comprised of Hogwarts students and their giant throaty frogs, will also perform original holiday themed songs over the course of the seasonal event.

From stockings to ornaments, the addition of specialty keepsakes and gift-giving items complement the land’s immersive holiday festivities as the theme park continues to envelope guests in the captivating world of Harry Potter.

A wide selection of all-new custom-made Christmas ornaments created especially for “The Wizarding World of Harry Potter” are available this holiday season. Collectibles include a variety of decorative Hogwarts castle snow globes, Hogwarts crest and mascot ornaments representing each of the houses, as well as a collection of unique tree toppers and house pennant garland. Wizard robes and wands and an array of Quidditch game accessories are perfect for gift-giving.

Inspired by J.K. Rowling’s compelling stories and characters that were brought to life in the Warner Bros. films, “The Wizarding World of Harry Potter” at Universal Studios Hollywood is a masterful recreation, faithful to the visual landscape of the films, including its iconic focal point, Hogwarts castle.

From its snow-capped roofs and cobblestone streets to the historic British sensibilities that characterize the whimsical look and feel of the land, “The Wizarding World of Harry Potter” transports guests of all ages to the very places they watched on the silver screen.

The architecturally stunning land also includes the captivating and highly acclaimed “Harry Potter and the Forbidden Journey” thrill ride, now enhanced with 4K-HD and ride film projecting at an astounding rate of 120 frames-per-second for an even more immersive glimpse into Harry Potter’s world, as well as “Flight of the Hippogriff™,” Universal Studios Hollywood’s first outdoor family coaster.

“The Wizarding World of Harry Potter” resonates with immense detail, inviting guests to revel in J.K. Rowling’s Wizarding World with the opportunity to enjoy authentic food and beverages at multiple locations, including Three Broomsticks and Hog’s Head pub, as well as the Magic Neep and Butterbeer™ carts.

A foray through the shops adds to the authenticity of the land with nine retail venues and locations, including Honeydukes™, Ollivanders™, Owl Post™, Zonko’s™ Joke Shop, Wiseacre’s Wizarding Equipment, Dervish and Banges™, Gladrags Wizardwear, Filch’s Emporium™ of Confiscated Goods and the Hogsmeade™ Station.

Additional information on Universal Studios Hollywood is available at www.UniversalStudiosHollywood.com.