#WeRateDogs: The Most Hilarious and Adorable Pups You’ve Ever Seen

It was inevitable that the social media breakout by Matt Nelson would become a book. Based on his Twitter account, #WeRateDogs: The Most Hilarious and Adorable Pups You’ve Ever Seen (Skyhorse Publishing hardcover; October 3, 2017; $15.99) features the most heroic, over-the-top adorable, wildly successful, all-around entertaining dogs the world has ever seen. It combines extraordinary photos with ridiculous captions to expand the knowledge and overall lives of its readers. It is not only an exceptionally reliable source for dog greatness; it is also a one-stop shop for happiness, one that Skyhorse takes great pride in publishing.

Sure to be a huge holiday favorite, this book will take readers on a journey through the science of dog rating and the unwavering rules associated with it. Questioning the accuracy of these ratings is ill-advised. They are certainly not arbitrary and this book is absolutely not just about how cute dogs are. It truly is all about ethics in dog rating. 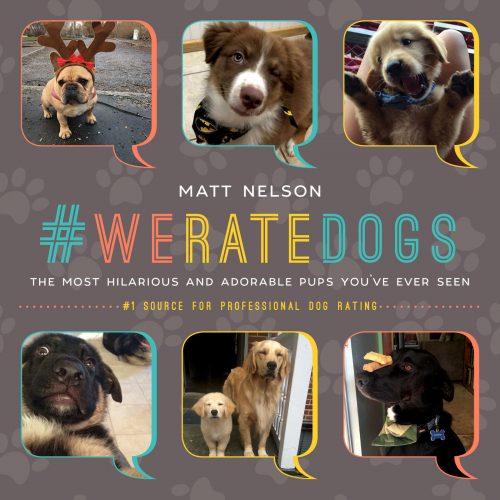 The #WeRateDogs book will produce an audible reaction with every flip of the page—whether a groan from a terrible pupper pun or an “aww” of seeing a super floofer. If #WeRateDogs takes you away from reality and pushes you into this conglomerate of absurdity for even a second, then it has fulfilled its purpose.

Matt Nelson was called “the Internet’s most famous dog rater” by the Washington Post. His success with WeRateDogs™ since late 2015 has been documented in Salon, New York Magazine, Buzzfeed, the Huffington Post, the Daily Mail, People, Study Breaks, and many more. Nelson has accumulated millions of followers across Twitter, Facebook, Instagram, and Snapchat in less than a year by showcasing user-submitted dog media attached to his trademark caption style. He resides in Charleston, West Virginia.

Skyhorse Publishing, one of the fastest-growing independent book publishers in the United States, was launched in September 2006 by Tony Lyons, former president and publisher of the Lyons Press. It has had forty-six titles on the New York Times bestseller list over the course of its ten-year history.

With more than 6,500 titles in print, and a focus on publishing books of the moment, Skyhorse publishes a maverick list that includes fiction, nonfiction, history, politics, rural living, cooking, humor, and children’s books. Lyons is dedicated to publishing books that make people’s lives better, whether that means teaching them a hobby, bringing them a unique and important story, or encouraging them to fight against injustices, conspiracies, or abuses of power.