Xbox, Mountain Dew, And Doritos To Give Away Xbox One X Consoles In “Every 60 Seconds” Auctions

Mtn Dew® and Doritos® are joining forces with Xbox this fall to launch the “Every 60 Seconds” promotion featuring an online auction program that will give fans the opportunity to win one of thousands of Xbox One X consoles. Available starting Nov. 7, Xbox One X is the world’s most powerful console and considered one of the most anticipated gaming consoles of the decade. 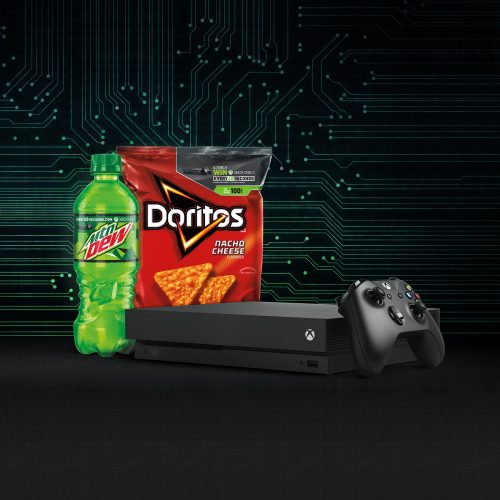 Here’s how it will work:

Fans will also have offline ways to acquire the new console.

The on-package codes for the auctions will be available on favorite Doritos snacks and new Mtn Dew products. Mtn Dew will introduce two new limited-edition flavors of Mtn Dew Game Fuel – Arctic Burst and Tropical Smash. The product and packaging will feature imagery from upcoming games Middle-earth: Shadow of War and Forza Motorsport 7. On shelves this fall, the gamer-go-to will be available in 20oz. bottles and a 12-pack of 12oz. cans.

DEW and Doritos have brought gaming to the next level since their first partnership in 2007. The brands collaborated in 2013 on an online fan auction for Xbox One that generated over 8 million bids from consumers across the country and have been key players in the release of fan-favorite games, including Titanfall 2 and Halo 4. Earlier this year, DEW announced the sponsorship of three global esports powerhouses – Dignitas, Splyce and SK – and launched the second season of the Mountain Dew League, giving amateur esports competitors a chance to become pros.

DEW and Doritos will offer consumers even more chances to win an Xbox One X later this year, with more details set to be released in the coming weeks.