Taco Bell and Xbox: Be the first to win an Xbox One X

Mark your calendars, the countdown starts now toward Aug. 31, when Taco Bell will give fans nationwide the first chance to win the newest member of the Xbox One family, Xbox One X when you pick up the new Steak Quesarito $5 box. Whether it’s powerful flavor, or powerful gaming, Taco Bell’s got you covered. 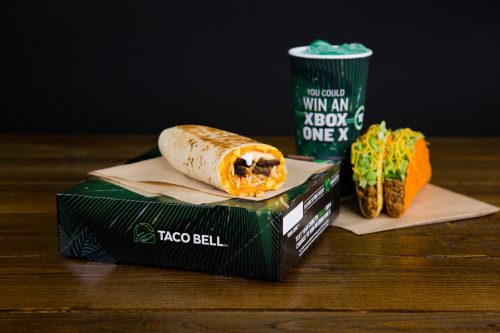 Beginning Aug. 31, each Taco Bell® $5 Box will include a unique code for consumers to text in for a chance to win the new Xbox One X. (PRNewsfoto/Taco Bell Corp.)

Beginning Aug. 31, each Taco Bell® $5 Box will include a unique code for consumers to text in for a chance to win the new Xbox One X. The Taco Bell $5 Box includes the new Steak Quesarito, a Doritos® Locos Taco, a Crunchy Taco and a medium fountain drink. Boxes will be available during the promotion from Aug.31 to Oct. 4 at participating Taco Bell locations while supplies last. No purchase necessary. See below for details.

Throughout the duration of the promotion, a potential winner will be notified on an average of every 10 minutes. Winners will be the first to win the Xbox One X, and will also win the Forza Motorsport 7 game and a three-month Xbox Game Pass subscription along with their console. Whether you’re a gaming fan, a Taco Bell fan, or just hoping to get lucky, start counting down the days until Aug. 31.

Taco Bell and Xbox first partnered to launch the original Xbox in 2001, and are returning to their roots with this promotion to launch the Xbox One X. After all, it’s only fitting to pair the powerful flavor of the Steak Quesarito with the world’s most powerful console.

“When it launches starting Nov. 7, Xbox One X will bring gamers an amazing new level of console power and immersion,” said Mike Nichols, Corporate Vice President and Chief Marketing Officer, Xbox. “We have a long history of partnerships with Taco Bell, dating back to the first Xbox, and are excited to once again work together to reward gamers with the opportunity to win Xbox One X.”

No purchase or payment necessary to enter or win. A purchase will not increase your chances of winning a prize. The Taco Bell® and Xbox® Game starts on 8/31/17 at 12:00 AM ET and ends on 10/4/17 at 11:59:59 PM ET. See Official Rules at www.tacobell.com/xbox for details on how to enter without a purchase, prize details, restrictions, and terms and conditions of participation. Open only to legal residents of the 50 U.S. states and DC, 18 years or older at time of entry. Void where prohibited. By texting the short code, you are providing your signed consent to receive autodialed text messages related to the promotion. Consent to receive text messages is not required or a condition of any purchase. Msg & Data rates may apply for each text message sent and received. To cancel, send STOP to 72823 (confirmation text will be sent). For help, send HELP to 72823. Check wireless plan for details. A potential winner will be notified on average every 10 minutes during the promotion. Sponsors: Taco Bell Corp., Irvine, CA and Microsoft Corporation, Redmond, WA.