Kevin Harvick, driver of the No. 4 Busch Beer Ford Fusion for Stewart-Haas Racing, will be holding more than just the steering wheel when he competes in the May 20 NASCAR All-Star Race at Charlotte (N.C.) Motor Speedway. He’ll also hold the financial fate of one consumer who will have the chance to take home a life-changing amount of cash.

In conjunction with the launch of the brand’s Busch Bucks loyalty program, one race fan will have the chance to win a cool million bucks – matching the first-place prize taken home by the All-Star Race winner – but only if it’s Harvick who takes the checkered flag. 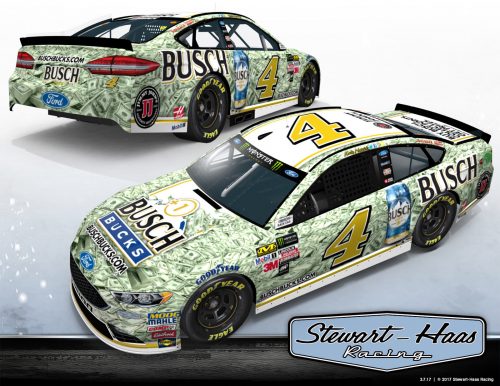 In conjunction with the launch of the Busch Bucks loyalty program, Busch beer is giving one race fan the chance to win a million bucks  matching the first-place prize taken home by the winner of the NASCAR All-Star Race at Charlotte Motor Speedway on May 20  but only if its Harvick who takes the checkered flag. (PRNewsfoto/Busch)

Consumers must enter for their chance to take home the grand prize by enrolling in the Busch Bucks platform on BuschBucks.com between April 17 and May 6. The winner will receive a trip to Charlotte Motor Speedway the weekend of the All-Star Race to watch the race from trackside and find out if they’re taking home the million dollars. Harvick will pilot the No. 4 Busch Bucks Ford Fusion with a special paint scheme featuring a million-dollar look…literally. If Harvick wins, the consumer winner will receive a million dollars, matching Harvick’s winnings1.

“Loyalty is one of the defining characteristics of the Busch beer drinker; he’s loyal both to his friends and family, as well as the beer he drinks,” said Chelsea Phillips, VP of Value Brands at Anheuser Busch. “Busch Bucks allows us to reciprocate and reward our loyal drinkers, and there’s no better way to kick off the program than by giving away a million bucks!”

“While we want to win every single week, the Busch Bucks million-dollar giveaway definitely ups the ante and adds some serious pressure to the No. 4 team in the All-Star Race,” Harvick said. “Even though it’s a non-points exhibition race, the stakes are going to be about as high as they can possibly be on May 20.”

After returning to racing in 2016 with a winning team in Stewart-Haas Racing to sponsor Harvick and the No. 4 car for 12 races, Busch expanded its partnership in 2017 to serve as the primary sponsor of the No. 4 team for 16 races. Busch has a storied history in racing over the past four decades, first becoming involved in NASCAR in 1978 when it sponsored the Busch Pole Award. The brand has been engrained in the sport ever since, including introducing the Busch Clash in 1979, serving as the title sponsor of NASCAR’s stepping-stone division to the Cup Series from 1984 through 2007, as well as being the “Official Beer of NASCAR” from 1988 through 1997.