Chipotle’s All-Natural Queso; Available in All U.S. Restaurants on September 12, 2017

Chipotle Mexican Grill is set to fulfill the wishes of queso lovers from coast to coast, with the announcement that it will be adding queso to its menu nationwide on Tuesday, September 12, 2017. The company has been testing queso in 350 restaurants in Southern California and the Colorado area and has decided to take it national. 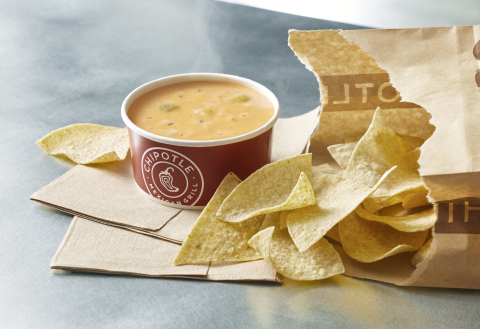 The complex and slightly spicy flavor of Chipotle’s queso comes from the combination of simple ingredients customers can recognize such as aged cheddar cheese, tomatillos, tomatoes and several varieties of peppers. Chipotle is the only national restaurant brand that uses no industrial additives, including so-called natural flavors, color or preservatives in its food (except lemon and lime juice which can be used as preservatives, though Chipotle uses them only for taste).

The national roll-out comes after several testing phases, beginning with initial tests in the Chipotle NEXT Kitchen in New York earlier this summer followed by expanded tests in Colorado and Southern California. Throughout the testing phase, Chipotle was able to gain customer feedback, tweak the recipe and ingredient proportions slightly, and arrive at the final recipe – a combination that has proved very popular with customers.

Customers can order queso on their entrée, or on the side in two sizes with chips. Prices vary slightly by city, but range from $1.25 to add it to an entrée to $5.25 for a large side order.