KFC and DC Entertainment announced today the third installment of the popular Colonel Sanders and Justice League team-up comic book series will be available in print exclusively in DC’s booth (#1915) at San Diego Comic-Con: International, July 19-23, 2017. Created by DC’s Custom Creative Studio, the finger-lickin’-good comic will also be available for digital download for a limited time starting on July 19. 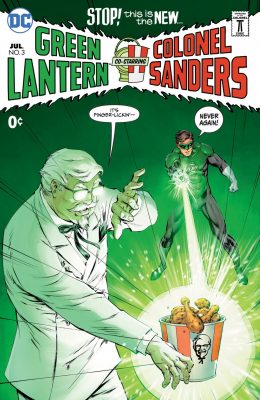 KFC #3 ACROSS THE UNIVERSE (PRNewsfoto/KFC)

In KFC #3 ACROSS THE UNIVERSE the Colonel goes cosmic in a star-spanning quest to bring crunchy, spicy satisfaction to a hungry universe, only to face a “thieving varmint” who steals his space-bound Zinger chicken sandwiches. Who else but DC’s Green Lantern can help the Colonel scan the universe to catch the thief?! KFC #3’s creative team includes writer Tony Bedard, penciler Tom Derenick, inkers Trevor Scott and Sean Parsons, with a cover by Tom Grummett and Trevor Scott.

“It’s been an honor, a privilege, and just plain FUN working on the last two KFC comics,” stated writer Tony Bedard. “I’m super-excited the story is a trilogy now, with the Colonel planet-hopping across the DC Universe. As a former GREEN LANTERN writer, it’s great to revisit Hal Jordan and the Green Lantern Corps. I’ve written many comics over the years, but the response to teaming up the Colonel with DC Super Heroes has been a phenomenon all its own.”

“As the largest pop culture event in the world, San Diego Comic-Con is the perfect place to unveil our third comic book with DC,” said Steve Kelly, KFC U.S. director of media and digital. “Fans of the Zinger who have been following Colonel Sanders’ quest to make it the most popular chicken sandwich in the universe will finally learn what’s next for the space sandwich in this latest DC comic.”

KFC first partnered with DC’s Custom Creative Studio in 2015 for the release of the critically-acclaimed KFC #1 THE COLONEL OF TWO WORLDS, which was followed by KFC #2 COLONEL CORP in 2016.