Stan Lee’s Kids Universe (SLKU), a company created by 1821 Media and Stan Lee’s POW! Entertainment, has announced the release of their newest title, Boomer at the Bat.  The book was written by Amazon-bestselling author Julia Dweck (Zombie-Kids; Frostbite) and illustrated by Chris Kennett (Star Wars), and is now on sale.

The story revolves around a baseball-playing bunny named Boomer, who finds himself with the chance to win the game in the team’s last at bat.  Told in a fun, rhyming style, Boomer at the Bat focuses on themes of teamwork and good sportsmanship. 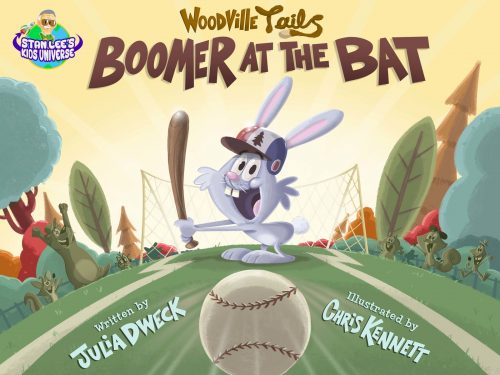 “Boomer is my favorite kind of story,” says Mr. Lee. “It’s a whole lot of fun, and teaches important lessons as well.”

Terry Dougas, co-founder of SLKU, agrees.  “You have a story involving the most popular sport for kids, and a great message on working together.  For us it was a home run.”

Boomer at the Bat is now available as an e-book on Apple ibooks, Google Play, Amazon Kindle, Kobo, and the Nook.