The New York City-based trio MAJIX (pronounced ‘magic’) is proud to announce their new single “Burn It Up” with a release date of June 16, 2017 on Sony/RED/Faces In The Crowd. “Burn It Up” celebrates a fusion between rhythmic pop and urban radio. The impressive mix of rap and vocals run alongside a hypnotic 808 bass that works on the dance floor as well as mixshow radio. The new song has the music industry buzzing about these young talents, managed by Radar Artist Management. No3Go, the phenomenal east coast duo behind Chris Porter’s “The Water Dance,” produced the track. 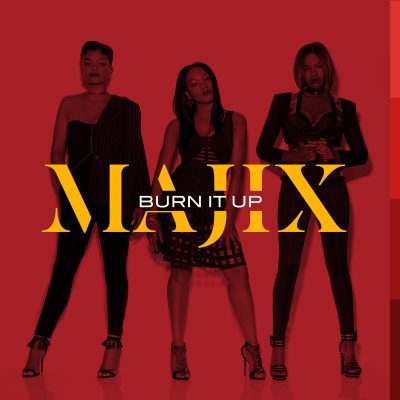 It has been a labyrinth journey for the MAJIX trio. The group is made up of talented members Taylor Nirvana Jones, Claire Jones and Mea Wilkerson. The ups and downs of the business have given these ladies a thick skin and the pit bull determination to never give up. The girls explain that “Burn It Up” has a two-fold meaning. The first is an ode to the ritual of writing all the negative things that have happened in your life down on a piece of paper and burning it up in order to leave those things behind. The second is about practicing that mindset and blazing a new trail in your own life.

That new trail led to Majix make their debut at the SXSW 2017 Festival. Since then the group has not looked back and has done a 3-month residence at the Faces In The Crowd Showcase which takes place at SOB’s in New York to critical and industry acclaim.  Ready to take their magic on the road, Majix will be making their L.A. debut on Thursday June 22, 2017 at Los Globos as part of “Sold Out” Faces In The Crowd Showcase- L.A, which coincides with the BET Awards Week.

Plans for the “Burn It Up” single include a lyric video to be released on June 30, 2017, the record will hit the radio in July, and a music video will be dropped July 28, 2017. There are also plans for the group to open for various artists. Majix is also in development of a reality show based upon real life aspects of the three members’ lives, which the group hopes to debut this fall.