To celebrate the 60th anniversary of the classic Audrey Hepburn/Fred Astaire musical film, “Funny Face,” Verve Records/UMe is releasing an expanded version of the colorful soundtrack featuring, for the first time ever, all the songs from the beloved romantic comedy resequenced in the order in which they’re heard in the film. Available September 29 on CD and digital, the 60th anniversary edition has been re-mastered in high-res audio for the first time and is augmented with eight previously unreleased bonus tracks, giving listeners the opportunity to hear earlier alternate versions of the songs including a few from rehearsals. 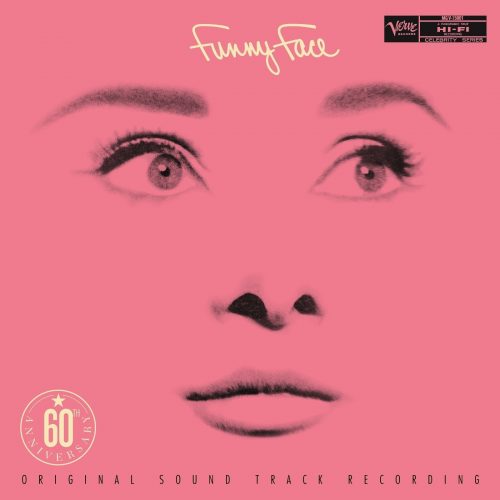 Available September 29 to celebrate the 60th anniversary of the classic Audrey Hepburn/Fred Astaire musical film, Funny Face, Verve Records/UMe is releasing an expanded version of the colorful soundtrack featuring, for the first time ever, all the songs from the beloved romantic comedy resequenced in the order in which theyre heard in the film. (PRNewsfoto/Verve/UMe)

Originally a 1928 stage show featuring the songs of George and Ira Gershwin and starring a young Astaire, “Funny Face” was reborn in 1957 with a different story, new songs, and additional music by Leonard Gershe and Roger Edens. The charming film somehow successfully teamed the 58-year old Astaire, playing a fashion photographer who also dances, with the 28-year old Hepburn as the owner of a bookstore who is accidentally discovered by Astaire and groomed to become a fashion model. “Funny Face” also features the famous vocal coach Kay Thompson in an important supporting role as Astaire’s publisher and editor.

Released in 1957 in conjunction with the movie, the original soundtrack, produced by Verve founder Norman Granz, featured the songs rearranged and edited down so both sides of the LP would be of approximate length. Taken as a whole, with the songs restored to their full length and in the proper order, one gets to hear the full musical story for the first time. Among the highlights are Hepburn’s character Jo Stockton on a wistful version of the Gershwin’s “How Long Has This Been Going On,” Astaire singing about his co-star in a swinging rendition of “Funny Face” (and the equally rewarding alternate version), the wild dance number “Basal Metabolism,” the cheerful “On How To Be Lovely,” and Astaire’s typically charming and warm vocalizing on “He Loves And She Loves.”

The soundtrack, which contains dialogue throughout, includes several other Gershwin classics (“He Loves And She Loves,” “Clap Yo’ Hands,” “‘S Wonderful” and “Funny Face”), as well as such Roger Edens and Leonard Gershe numbers as “Bonjour, Paris!,” “Let’s Kiss And Make Up,” and the amusing “Think Pink” (which features Thompson).

Fans of the film and of Fred Astaire and Audrey Hepburn will certainly love this essential 60th anniversary edition of “Funny Face.”