The Macallan unveils the newest addition to the Masters of Photography Series, with Steven Klein

Today unveils The Macallan’s sixth Masters of Photography release, part of a limited edition series which showcases the mastery and art of both photography and whisky making. This edition marks a change in creative direction, with the master of visual ambiguity, Steven Klein, capturing and distilling a single moment in time through film and imagery.

Since 2008, The Macallan has partnered with some of the most well known photographers in the industry like Annie Lebowitz, Elliott Erwitt and Mario Testino to marry the art of whisky making with their incredible interpretations of the world of The Macallan. This year, The Macallan Masters of Photography series partnered with Steven Klein to explore an ingredient fundamental in the making of The Macallan: time. The unspoken fourth ingredient in The Macallan as each bottle of whisky captures a moment in time; to be enjoyed in the future – but always rooted to a time in the past. 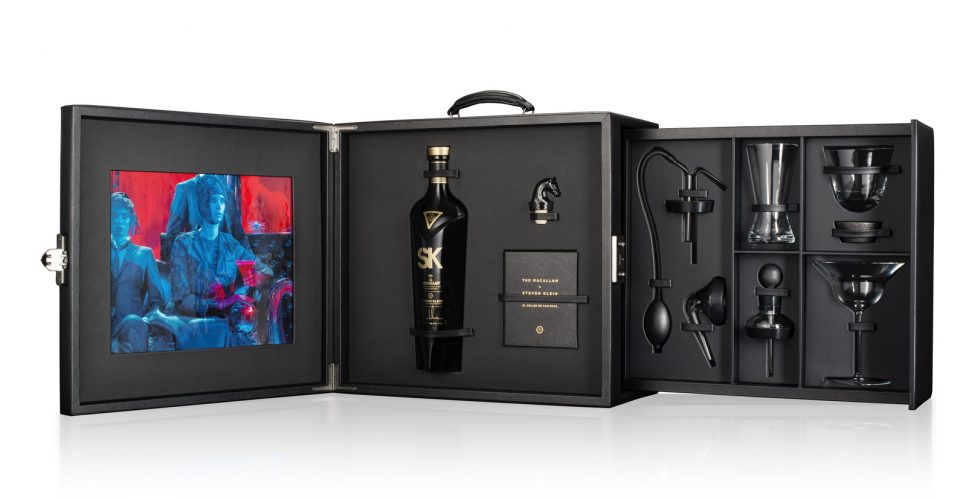 To portray this distinctive piece, The Macallan Master Whisky Maker, Bob Dalgarno, has created a  whisky of exceptional quality. It reveals a very specific and unusual character and flavor, itself capturing a moment in time, mirroring Bob Dalgarno’s own interpretation of Steven Klein’s work.

Inspired by the past, and uncharacteristic for The Macallan, peated notes represent the smokiness of the industrial setting of Klein’s film. Some of the rare Macallan whiskies of that era were indeed peated in profile. The whisky also represents The Macallan’s first ever use of casks previously used for Rioja wine, which provides flavors of sweet berries and spices, along with an unusual pinkish red color, again reflective of the artist’s imagery. The result, a whisky with sweetness and vibrancy unseen before in any Macallan.

Steven Klein commented, “This project has given me the chance to create a film and a special edition bottle and box. This was a true merging of artist and commerce, where I had great support from the team at Macallan in this endeavour.”

Klein continued “My intention was to examine a world standing still through a moving camera. Typically with consumption of alcohol, there is always an abundance of movement. I thought what if it had all stopped for a moment and I could take a closer look at it. The idea is the perception of time. I used one of my favorite designers, Thom Brown, for the characters because I believe his clothes are bridged between the past and future in a great way.”

Klein distills a moment in time through his distinctive and disruptive lens to create a short film and ten individual images of an incredible tableau. This edition is paired with a whisky of such standout quality, itself capturing an ultimate Macallan moment, limited to only 1,000 bottles worldwide.

Ken Grier, Creative Director, The Macallan, said “Our commitment to the extraordinary is reflected in a restless spirit of dynamism, creativity and mastery to create the ultimate spirit. We bring together things which can appear ordinary and transform them into something incredible. We create, define and disrupt moments in time.”

The Masters of Photography: Steven Klein edition is presented in a stunning black case containing the limited edition whisky and one of ten different Steven Klein exclusive signed prints. A striking horse’s head bottle stopper, along with a range of custom barware tools to create special serves and flavor experiences are also included, inspired by the most innovative trio in the world of cuisine, the Roca brothers of El Celler de Can Roca in Spain and ultimately, Klein’s own dark and glamorous style.

This limited edition liquid will retail at approximately $2,995 USD, with only 100 bottles allocated to the USA.