Ireland’s magical Connemara Mountains are the setting for Frances Powell’s newest page-turning work of fiction. “Mystery of White Horse Lake” is a gripping tale of murder and supernatural mystery that spans decades, which one reviewer has called “a thrill to read.” “Mystery of White Horse Lake” is available today in ebook format at Amazon, with a print release set for May 5.

The protagonist of Powell’s novel is Cathleen Cullen, who came to the isolated, austere Castle Chonamara many years ago as a lowly housemaid. She steadily worked her way up to housekeeper, earning the trust and respect of the families she served. The novel is written from a first-person perspective, so the reader witnesses everything from Cullen’s wise perspective. 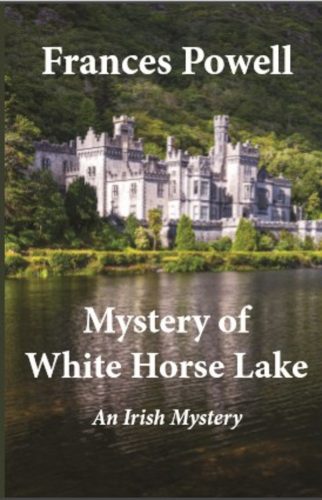 However, there’s more to Castle Chonamara than meets the eye. The castle had been built on sacred land of the Sidhe, fairies who inhabit these mountains and jealously guard their home from those they deem unworthy. Protecting the estate’s walled garden, the tiny Sidhe are not the kind and gentle fairies with which most readers are probably familiar. Only a few benevolent caretakers have been fortunate enough to glimpse the Sidhe, let alone speak with them, and only then because they choose to be seen. Humans with a dark nature or bad intentions, and those they feel unfit to walk their sacred grounds, can easily fall victim to the fairies’ wrath.

An ancient curse allows the Sidhe to summon a powerful white stallion from deep within the waters of Pola Capell Lake to claim unsuspecting victims. In her fifty-plus years as an employee at the castle, Cullen has seen the spectral horse with her own eyes, but has so far been powerless to prevent six murders. “Mystery of White Horse Lake” follows the housekeeper as she attempts to break the terrible curse that grips the estate and prevent a seventh person from falling prey to the fairies’ sense of justice.

“Frances Powell has a passion for the fantastical events of probabilities and possibilities that surround a legend,” says Emily-Hane Hills Orford in her Readers’ Favorite review. “‘Mystery of White Horse Lake’ is a captivating tale full of mystery, fairies and a phantom horse, all the good stuff that an Irish legend is made of.”

Powell first made her mark on the literary world with “The O’Brien: A Ballysea Mystery,” the first in a series featuring the majestic Irish Wolfhound as a central character. The breed’s popularity has resulted in a large, enthusiastic following for the series; other “Ballysea Mystery” books include “A Bad Wind Blowing” and “The O’Brien: The Untold Story.”

“The Bodyguard,” Powell’s second novel, also earned a 5-star rating from Readers’ Favorite, which described it as “tightly plotted, suspenseful and well-written.” The book is a historical spy caper, demonstrating the author’s skill with different genres. Today, Powell is working on a new murder mystery; “Lady of the Wye” will be set in the Herefordshire market town of Ross-on-Wye.

Frances Powell lives outside Baltimore, Maryland with her husband, Russell, and Goldendoodle, Winston. Her love of Ireland and the magnificent Irish Wolfhounds inspired her “A Ballysea Mystery” series. As well as writing novels, she is a talented technical author with over 20 years’ experience.