“Guardians of the Galaxy Vol. 2” is filled with great action, humor and performances, but it is also infused with a new mixed tape and soundtrack, a dynamic that resonated deeply with audiences in the first film as evidenced by the success of the soundtrack album.  The Grammy®-nominated “Guardians of the Galaxy” soundtrack reached No. 1 on the U.S. Billboard 200 chart, becoming the first soundtrack album consisting entirely of previously released songs to top the chart. The album was certified Platinum by the R.I.A.A. 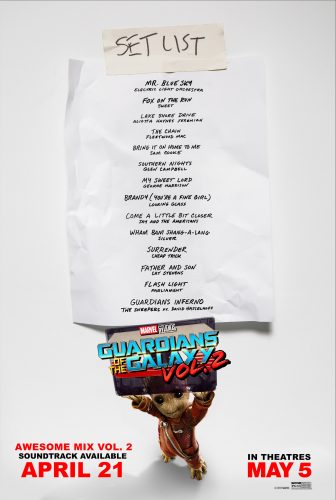 Guardians of the Galaxy Vol. 2: Awesome Mix Vol. 2 is a collection of 14 songs and once again, music plays an important role in the telling of the story.   In an exclusive interview for Rolling Stone Magazine, director James Gunn provides commentary for each track on the album.

Director James Gunn explains, “We had Awesome Mix Volume 1 last time, and this time we have Awesome Mix Volume 2. It was so important that it’s actually part of the film’s title this time around. As most people know, Quill’s mom made the first tape for a slightly younger boy, and she made the second tape for a slightly older boy. So, in many ways the songs reflect the story.”

Continuing, he adds, “The songs are a little bit deeper in some ways; a little bit less pop in some ways. Some of the choices are a bit more eclectic and some are a bit more popular. But we have a real amazing group of songs that, like in the first movie, I wrote into the script. They are a part of the storytelling. Each song is very specific to the scene where it’s placed.”

On the importance of the score in the film, which often gets overlooked in a film heavy with popular songs, James Gunn adds,  “The one thing that is underappreciated is how important Tyler Bates’ score is to the first film,” says the director.  “We still use the score from the first movie while shooting this film and it doesn’t get the respect it deserves because it gets so overshadowed by the soundtrack. There’s some beautiful score on that first soundtrack, and I know that the music we’ve written for the second film is even better than what we did for the first film. Tyler Bates has absolutely outdone himself, and we’re giving something very special to people with the music in this film, both the pop songs and the actual score.”

Gunn and composer Tyler Bates worked on the score during pre-production so that they would have some of the major score themes worked out before the shoot began. This allowed Gunn, the actors and the camera crews to work with the music that will end up being used in the final film.

About “Guardians of the Galaxy Vol. 2”
Set to the all-new sonic backdrop of Awesome Mixtape #2, Marvel Studios’ “Guardians of the Galaxy Vol. 2” continues the team’s adventures as they traverse the outer reaches of the cosmos. The Guardians must fight to keep their newfound family together as they unravel the mystery of Peter Quill’s true parentage. Old foes become new allies and fan-favorite characters from the classic comics will come to our heroes’ aid as the Marvel Cinematic Universe continues to expand.

About Tyler Bates
An array of artistic influences, from John Coltrane to Chopin, and the rock operas “Hair” and “Jesus Christ Superstar, set the course for Los Angeles-born Bates’ musical signature that often combines disparate components that become indigenous within his compositions for film, television, video games and new media. His ability to create new worlds of atmospheric soundscapes fused with traditional orchestra led to groundbreaking scores for Zack Snyder’s “Dawn of the Dead” and “300” films, and most recently, James Gunn’s “Guardians of the Galaxy” Marvel franchise.

His current TV projects include the Marvel/Netflix series, “The Punisher,” written and directed by Steve Lightfoot, and Genndy Tartakovsky’s “Samurai Jack,” for Adult Swim.

This July 2017, Bates will embark on a world tour with shock-rocker Marilyn Manson, as lead guitarist, to celebrate the release of Manson’s forthcoming album “SAY 10,” which like Marilyn Manson’s “The Pale Emperor,” was co-written and produced by Bates. The duo created the title song “Cupid Carries a Gun,” for WGN’s “Salem,” which Bates also scored, as well as songs for both John Wick films.