Inimitable and irrepressible , Black Death Vodka returns to the on- and off-premise across  the United States this month as it ramps up in New York and New Jersey and starts with distribution on the West Coast.

Launched globally in 1987, by 1995 Black Death Vodka was selling more than 120 million bottles and cans in over 60 countries.  It had won over 30 medals in International competitions and became the preferred vodka among the rock music elite.  After being attacked by the then-Bureau of Alcohol, Tobacco and Firearms, Black Death Vodka went underground in the late 1990’s. 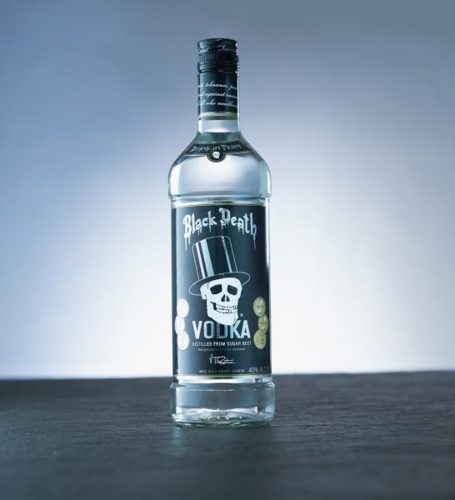 “Now is the right time for Black Death to return,” comments Bob Miller, Chief Commercial Officer for Black Death Drinks.  “On our first rodeo in the 1990’s people really were not as mentally liberated as they are now. Today, almost everybody has a personal opinion they are not afraid to air and tattoos and skulls are mainstream, whereas in the 1990’s they were symbols of rebellion and angst. We have been copied hundreds of times as other brands try to capitalize on our image. Black Death Vodka has an incredible history and the authenticity of who we are and what we stand for make it the perfect time to return to the States.”

Black Death Vodka traces its origins back to 1906, in Siglunes in the North of Iceland.  The ancestors of Valgeir T. Sigurðsson fished, raised livestock, and traded their “Moonshine” with passing boats. To keep warm in the cold winters the family would drink the Moonshine they distilled which soon became a favorite of visiting sailors. This popular Moonshine would eventually, after much refinement deliver the recipe for Black Death Vodka. Sigurdsson’s signature still appears on each bottle as a guarantee of authenticity and a testament to the quality of the product.

“Beyond our Icelandic roots, the soul of Black Death is about our place in recent history.  We were the first spirit to have a manufacturers warning, the first to communicate Don’t Drink and Drive, the first to use curvy girls, gay people and transvestites in our ads, the first beverage to support disabled persons, the first to run ads in communist countries saying we stand against communism and the first spirit brand to run ads supporting the worldwide fight against AIDS,” Miller added.

“We encourage respect, tolerance peace and freedom of choice. We stand against racism, radicalism, intolerance, and all who needlessly harm others and we are the first alcohol brand to believe in our message enough to put it on our label and cap,” he concluded.

Black Death Vodka will initially be made available in the New York metropolitan and New Jersey markets with a suggested retail price of $19.99 per 750ml bottle.