Pet Ownership Creates the “Glue” That Holds Societies Together

Pet owners report stronger neighborhood social connections than non-pet owners according to a recently published study. They were consistently more likely to report social benefits such as helpfulness, friendliness and trust between neighbors. This research adds strength to claims that pet ownership is a valuable and positive feature in community and neighborhood life. 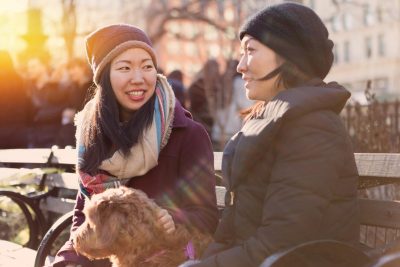 “The notion that pets facilitate the ‘glue’ that holds society together, or ‘social capital’ goes beyond the more commonly investigated role of pets as a social icebreaker,” says Dr Lisa Wood, lead researcher. “We were interested in the extent to which pets facilitate social interactions and creates the ‘ties that bind’ communities together.”

The University of Western Australia study, published in SSM-Population Health , was conducted in collaboration with the WALTHAM Centre for Pet Nutrition, part of Mars Petcare and was led by Dr Lisa Wood, School of Population and Global Health. Researchers surveyed over 2,500 pet- and non-pet owners across three US cities (San Diego; Portland; Nashville) and one Australian city (Perth). The survey measured multiple aspects of social capital including helpfulness, friendliness, trust, and civic engagement. The study was the first of its kind to examine the social capital effects of pets in two different countries. Owning a pet was associated with higher social capital compared with not owning a pet at all. This finding was consistent across residents surveyed in all four cities studied.

“The stronger associations observed for dog walkers, may be related to the role of dog walking as a way of greater neighborhood surveillance and increased perceptions of safety within a community,” says Lisa Wood. “Pets in general support first meetings between neighbors, and they are often a topic of conversation over the garden fence.”

“Pet ownership brings health and social benefits and there is a growing call for the societal impact of pets to be taken seriously,” says Sandra McCune, HAI Scientific Leader, WALTHAM. “The study adds further support to this agenda and for establishing ‘pet-friendly’ cities, towns and accommodation. The availability of parks and open spaces suitable for dog walking is essential for pet well-being, and for people to fully experience the benefits of pet ownership.”