20 top domestic and international teams including teams representing all five United States military branches will compete in the event for a winner-take-all $10,000 purse. 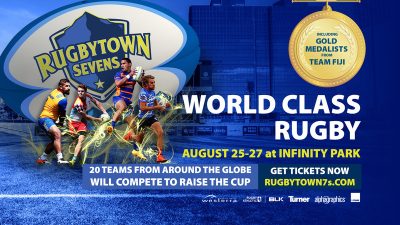 20 world-class rugby 7s teams, including members of Olympic gold medal winning Fiji team and teams from each branch of the United States military, will compete at RugbyTown USA for a chance to win the RugbyTown 7s Championship August 25-27 at Infinity Park in Glendale, Colorado. (PRNewsfoto/RugbyTown USA)

“The RugbyTown Sevens Tournament has become one of the premier invitational tournaments in the world,” said Glendale Mayor Mike Dunafon. “When you come to Glendale, you’re coming to hallowed ground. This tournament is making Glendale famous as the rugby capitol of North America. It really is RugbyTown, USA”

Rugby 7s, the quicker variation of traditional 15-a-side rugby union, is currently one of the fastest growing sports in the U.S. Matches are played seven-a-side in two seven-minute halves and feature speed, strength and stamina.

It’s also one of the newest Olympic sports, debuting at last summer’s games. RT7s will be a proud host of the Viti Barbarians comprised of several members of Team Fiji, gold medal winners at the Olympics in 2016. It will mark the first-time members of the Fiji National Team compete in the tournament.

“My goal for RugbyTown 7s is to have it be the biggest sevens tournament in the world,” said longtime RT7s tournament partner and Fijian rugby legend Waisale Serevi. “Who knew when Fiji won the gold medal in the Olympics that they would be in Glendale in the next year,” pondered Serevi. “The world will be looking this way when the Viti Barbarians arrive.”

“The City of Glendale and Infinity Park are tremendous hosts and really roll-out the red carpet for the teams participating,” said Anthony Poore of All-Army, which has won four of the five Military Championships contested at RugbyTown 7s.

“This is a great way to expose people who have not seen rugby to the 7s rugby game. It brings a tremendous number of players and fans to town who stay in Glendale hotels, eat at Glendale restaurants, go to Glendale bars and shop at Glendale stores,” explained Glendale Deputy City Manager Linda Cassaday.

The event will also live stream at rugbytown.us/stream to over 100 countries around the world, exposing The City of Glendale and its rugby on a global scale.

In addition to the on-field action, RT7s will bring its fans the annual Bruises & Brews Beerfest, which will take place Saturday August 26, from 12-4 p.m. 20 breweries will showcase their top brews, along with distilleries and hard ciders. Information and tickets for the Bruises & Brews Beerfest can be found at http://glendalebeerfest.com/

For information and tickets to RugbyTown Sevens, visit http://rugbytown7s.com