KUMA Games announced the release of Space Epic Untitled,  a new style of TV entertainment built with 3D Video Game technology, in which fans star in, play, and help author “gameisodes” using their phones and TV devices together.

Space Epic Untitled is a multiplayer, fast-action Sci-FI experience built for AppleTV, FireTV, AndroidTV, and PC. Fans and their friends join together in “couch co-op” mode, to man a piratical asteroid mining ship, each player commanding a different action station with their iOS or Android mobile device.

“We’re rebuilding the TV experience for today’s consumer. Like the best TV, SEU is something we do together, in our living rooms, with friends” says Keith Halper, KUMA’s CEO. “Space Epic Untitled recruits viewers into the TV experience, making TV game-like, social, and interactive, without giving up TV’s awesomeness.” 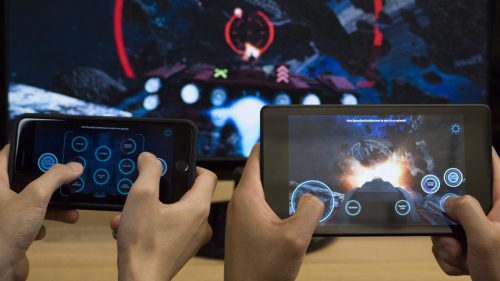 Fans can use the cameras on their phones to broadcast themselves into the game and be seen by other players. Creators can add new storylines, characters, ships and craft worlds on the Space Epic Untitled wiki, to be vetted for use in upcoming episodes.  Players command spaceships, fire futuristic weapons, and secure the future of Mars through their gameplay and by acting in an epic interplanetary deathmatch.

“Today’s consumer wants to ‘star’ in their own entertainment” says Keith Halper, CEO of KUMA.  “We’re creating action movies as sandboxes; places for fans to play in, and take ownership of their favorite stories. With Space Epic Untitled we’re kicking off a new kind of TV storytelling.”

Keith Halper is the award-winning Executive Producer of 11 Star Trek video games for Simon & Schuster Interactive/CBS corporation and the co-author of the official Klingon National Anthem. “Science fiction fans go to conventions, cosplay, write fan fiction, and arrange their lives around the worlds they love. But they’re excluded from the official storylines, forced to look on like servants at a feast,” says Halper. “I wanted to create a world that fans could own and populate with their own passion and great ideas. We provide structure to keep the story coherent, but the fans create our world.”

Space Epic Untitled: Episode 1 “The Cat In The Doorway”  is available for free today .