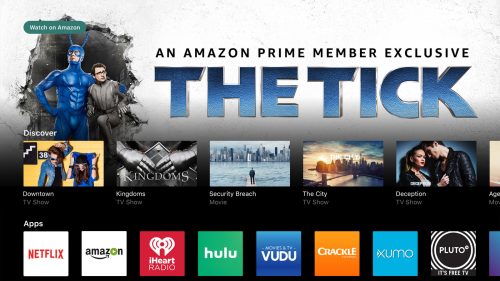 Amazon Video allows consumers to buy or rent thousands of movies including popular licensed content. Users can also opt to join Prime Video which grants unlimited access to thousands of titles including critically-acclaimed and award-winning Amazon Original Series and Movies such as Transparent, The Grand Tour and Manchester by the Sea and kids series Tumble Leaf. New Prime customers interested in trying out Prime Video are eligible for one free 30-day trial.

The addition of Amazon Video to VIZIO SmartCast TV gives consumers access to even more content options with features including select 4K Ultra HD titles on compatible displays featuring VIZIO SmartCast TV.  Because the app is accessible directly from the display, Amazon Prime members can now easily access movies and TV episodes without the need for a separate streaming device.

VIZIO SmartCast TV allows users to browse new shows, music and then launch content directly from their displays with the touch of a button on the new 2017 remote. Featuring the V-button, the new 2017 remote provides one-button access to the VIZIO SmartCast TV user interface, along with shortcut keys to top apps, including Amazon Video. For a limited time and while supplies last, owners of eligible VIZIO models can receive the new VIZIO SmartCast remote either free or for a nominal fee by visiting vizio.com/remote (some conditions apply).

1 The third party applications and content described herein may only be available in certain countries and languages, may require additional fees or subscription charges, and may be subject to future updates, modifications, interruption and/or discontinuation of service without notice, and VIZIO has no control over such content. 4K Ultra HD or HDR availability varies by application and may be subject to subscription fees, internet service, and device capabilities.