Captive Threat won the 11th Annual National Indie Award as the Best Political Thriller of the year. This prestigious award is only bestowed to those novels that embody absolute perfection, which this award was created to celebrate. It recognizes authors who have put their heart and soul into their work and rewards writers that strive for perfection in their genre. By scrutinizing novels and identifying those that stand out, this award helps establish independent publishing as a strong and proud facet of the publishing industry. Ms. Ellen Reid, director of NIEA went on to say,

“We are proud to announce the winners and finalists whose books truly embody the excellence that this award was created to celebrate, and we salute all of you for your fine work” –Ellen Reid, NIEA 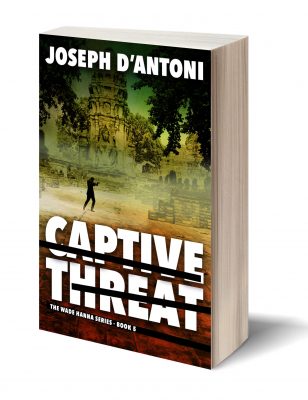 Captive Threat‘s recent release has taken the market by storm. This thrilling novel has been on the receiving end for many different accolades including being named a Finalist in the Beverly Hills Book Awards. The Beverly Hills Book Award is an esteemed award that recognizes books with superior writing that entices readers with an immersive and engaging story line. It also noted praises from the Midwest Book Review.

Midwest Book Review stated, “Clearly, D’Antoni is a master of the genre and is impressively skilled at deftly creating memorable characters and construing riveting storylines coupled with unexpected twists and surprising turns.”

This action packed novel has taken the series to an entirely different level with impeccable attention to details and a meticulous flow of writing. The thrilling novel involves an MIT professor who becomes America’s #1 traitor after leaking military secrets to the entire world. The professor and his family are abducted by soviet agents and are traded to North Vietnam right after the historic war ends. Wade’s team must locate and infiltrate a jungle monastery where the professor is being held, but the monastery is heavily guarded.

ABOUT THE AUTHOR
D’Antoni comes to his writing as a nationally recognized forensic economist whose clients have included the likes of the Department of Justice, FBI and Intelligence Agencies. He holds a doctorate degree from the University of Southern California where he has also served as assistant professor on the faculty. It is evident that D’Antoni uses his skill and experience as a testifying expert to craft intriguing plots and character development which have been described as unparalleled for this genre.