Cops Lie! is a new mystery / crime thriller novel by Leonard Love Matlick. The story is fiction, but it is based on fact. Filled with descriptions of cop abuse and killings that are fresh out of today’s news stories.

NYPD Officer Charles Griffin, a known drunk, a notorious bully, and dirty cop is involved in stealing drugs and money. When an accident with an 18 wheeler kills him, one other cop, and leaves two other cops in critical condition, Detective Tony Philadelphia, a homicide detective from the 9th precinct, is tasked with finding out what happened. The depths of what he uncovers is far more corrupt and disturbing than he ever could have anticipated. 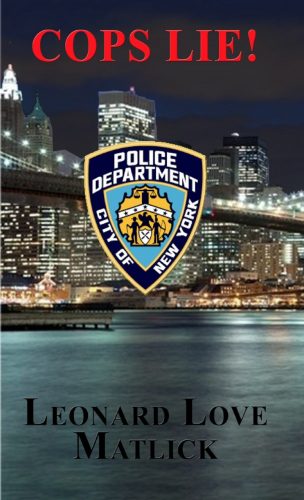 What People Are Saying:

“Misbehavior, corruption, and lawbreaking are all on full display in this gritty tale of bad cops and good guys in the New York City Police Department… Tony is an NYPD detective who gets wind of potential malfeasance on the part of one of his fellow officers. If it were simply the typical freeloading, bribe taking, or head bashing, that most of his cohorts engage in, then he’d let it pass. But his source implies that it goes a lot deeper—including everything from theft, extortion, money laundering, and even committing murder for various mob bosses. Straight shooter Tony hates the thought of ratting out any fellow officer, but the behavior is so egregious he feels he must inform his superiors. Soon he and his partner, Longo, are on the trail of not just one but a band of rogue cops committing crimes all over the city.” – Joe Kilgore, The US Review of Books.

“Matlick brings a sledgehammer to every page, creating a nonstop screed against the police community that never lets up. The sins noted in each chapter are total, including theft, murder, brutality, adultery, drug dealing, drinking on the job, and much more.” – Best Thrillers

“Readers receive a fine mix of mystery, intrigue… the unraveling of one policeman’s life by peers who uncover more than a simple case of street graft or drug money… an exceptionally interesting read filled with turns even the savviest detective story reader won’t see coming.” – Diane Donovan, Midwest Book Review