Just in time for the Winter months and cooler temperatures, Farmer Boys, the fast casual burger concept known for its award-winning burgers, cooked-to-order breakfast, specialty sandwiches, and farm fresh salads, will be featuring three soup offerings on their farm fresh menu. The signature soups will be available at all Farmer Boys locations from November 21 through the end of March 2018. 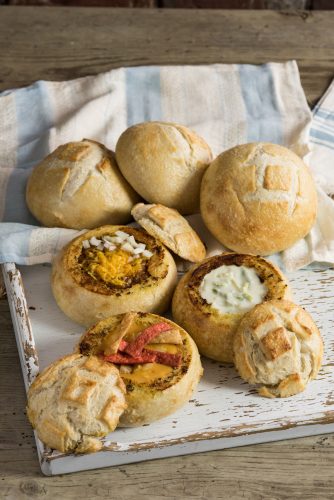 Farmer Boys, the popular fast casual burger concept with over 90 locations in California and Nevada, will feature three signature soups on their menu from November 21 through the end of March 2018. Customer favorites Boston Clam Chowder and Scratch-Made Chili will return to the menu, as well as the new Cheesy Chicken Tortilla Soup. (PRNewsfoto/Farmer Boys)

Soups were first introduced on the Farmer Boys menu in 2008 and have been back by popular demand every year since. The Boston Clam Chowder and signature Scratch-Made Chili have been fan favorites since the beginning, while the Cheesy Chicken Tortilla Soup is the newcomer to this year’s bread bowl offerings.

Farmer Boys features several seasonal menu items throughout the year. In an effort to continually deliver the flavors their customers desire, they surveyed a group of customers online about what soup they wanted to see added to the menu this year. The result was overwhelmingly in favor of a Mexican-inspired soup.